The above quote tells you everything you need to know about writing a really good sentence.  With this in mind we're going to take a look at some hints and tips to help you write the best sentences possible.

Using the right words to express your meaning is paramount when you're writing. Some words have a more literal meaning and are called denotation, other words may have an emotional meaning, they're called connotation.

You need to choose the right word to describe what is happening in your sentence.

Her sneaky acts made the game interesting. (Unclear).

Her silly acts made the game interesting. (Clear).

2. Remove all unnecessary words and phrases.

If one word says it all, why use more?

I read in order to learn more about the world. (Wordy).

I read to learn about the world. (Concise).

She'll be back in a period of time. (Wordy)

She'll be back later. (Concise).

3. Engage your readers with the active voice.

Your sentences will be more alive when you use the active voice.

She is enjoying her new shoes.  (Passive voice).

He is playing with his friend. (Passive voice).

He plays with his friend. (Active voice).

"That" plays an important part in the English language, but it means it can also be overused.

Not unlike "that", "there is" and "there are" aren't always required in a sentence.

There are three people who committed a crime.  (Overused).

There are times when repetition is essential in a sentence, because it can steer a motif in the right direction or accentuate the meaning for a writer.

In my opinion, I'd rather you investigate a bit more before taking the plunge.  (Overused).

I want you to investigate more before taking the plunge.  (Correct).

7. Try to be a little less conversational.

When you're writing on social media or texting someone you tend to use more conversational language.  Overusing words like "really" and "so".  When you're writing a book or article your language should be different and more concise.

Really, I just want her to leave.  (Incorrect).

So, it was apparent that he wanted her to leave. (Incorrect).

I wanted her to leave. (Correct).

He wanted her to leave. (Correct).

8. Avoid writing in the negative.

When you're writing in the negative you're probably using too many words to say what you really want to say.

When you're trying to be specific about something it can sometimes appear overdone.

If you want to be a good student, it's important not to hesitate.  (Incorrect).

A good student does not hesitate.  (Correct).

10. Spice your sentences up with adverbs.

Writers love to use -ly words in sentences, but why not spice up your sentences with an adverb?

He quickly jumped off the diving board.  (Incorrect).

He launched off the diving board like a pellet out of a BB gun. (Correct).

Sentences appear more cluttered when general nouns such as situation and degree are used.

He is an expert in the area of international relations.  (Incorrect).

He is an expert in international relations.  (Correct).

12. Use single words, not their definitions.

Replace explanatory phrases with a word that summarises that explanation.

The harvest also needed to be marketable so that families would be able to sell any yields that exceeded what they personally required.  (Incorrect).

The harvest also needed to be marketable so that families would be able to sell any surplus.  (Correct). 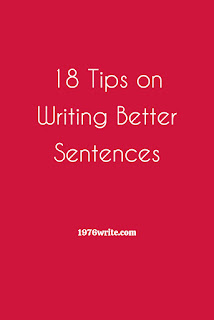 Rearrange sentences so that you remove noun strings being used as adjectives.

Developing procedures to protect the safety of workers in underground mines.  (Correct).

Sentences that include nouns ending in -tion, simplify the sentence by changing the noun to a verb.

They will collaborate in the creation of new guidelines.  (Incorrect).

They will collaborate to create new guidelines.  (Correct).

Find the verb hidden in a verb phrase and drop the rest of the phrase.

The results are suggestive of the fact that tampering has occurred.  (Incorrect).

The results suggest that tampering has occurred.  (Correct).

16. Substitute complicated words with simple ones.

The department will disseminate the forms soon.  (Incorrect).

The department will pass out the forms soon.  (Correct).

The decision of the committee is final.  (Incorrect).

The committee's decision is final.  (Correct).

Substitute phrases that suggest a transition with simple conjunctions, verbs, or other linking words.

Imagine a mental picture of someone engaged in the intellectual activity of trying to learn what the rules are for how to play the game of chess.  (Incorrect).

Imagine someone trying to learn the rules of chess.  (Correct).