What You Need to Know About Abbreviations

Abbreviations, what are they, and how do we use them?
There are different kinds of abbreviations. The way an abbreviation is written relies on the category it belongs to.

Acronyms
Words that are formed from initial letters of other words and pronounced as they are spelled. A few examples:

Some are well-established within society, so much so that they've become 'normal' words. 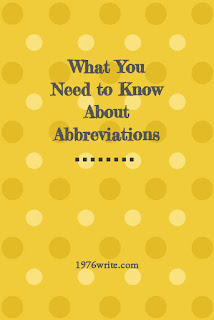 A contraction is an abbreviation with letters removed from the middle of the word.

Initialisms are abbreviations consisting of initials (first letters) of words pronounced as separate letters when spoken.

Apostrophes aren't required when forming the plural of an initialism.
Examples:

A shortening is an abbreviation where the end or beginning of a word has been dropped.