What You Need to Know About Nouns, Verbs, and Gerunds

Taken from the Latin word 'nomen', nouns identify everything you can see.  This includes people, places, things and ideas.

Here are some examples to help you determine what they are and how you use them in a sentence:

Animal - A scientific name or type of species, or a word that signifies an animal.

Example: The Lion roared that night.

Person - A proper name, occupation or title that signifies a person.

Example: Christina went for a walk to the shops.

Place - A location, general vicinity or a word signifying a place.

Example: The cinema opens at 10:00 Am this morning.

Thing - A living or non-living thing a word that signifies a thing or an object.

Example: I lost my cellphone last week at the shopping mall.

Idea - A conception existing in the mind,  a word that signifies an idea.

Example: Everyone should follow the law of the land.
Important Operations of Nouns

Nouns can perform many different functions in sentences, or do distinctive jobs.

Subject let's us know what or who the sentence is all about.

The who or what is the doing the verb action is done by the Complete Subject along with the modifiers (descriptive words) that go with it.

Example: The big, black, panther grabbed a boy from outside of his house.

A Simple Subject let's us know what or whom performs the action in the sentence.

Example: The bright silver coin gleamed on the sidewalk.

Direct and Indirect Objects as Nouns

Direct Objects in sentences give meaning to the subject's action of the verb.  In the case of a direct object it answers the question of who(m) or what.

Indirect Objects identify to whom the verb is performed.

Example: James sent his aunt a postcard from Florida. 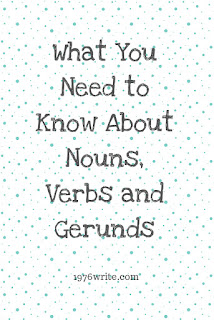 Nouns Paired With a Preposition

Prepositional phrases are comprised of a group of words that usually contain a preposition, a noun or pronoun and any modifiers.  Prepositions commonly sit before its object.

Example: The flock of tiny swallows flew over the trees near the lake.

Objective complements can be followed by a noun or adjective which renames or modifies it.

Subjective complements are nouns, pronouns or adjectives that follow a linking verb.

Example: Sarah is a gifted athlete.

What Are Proper and Common Nouns?

A Proper Noun is the collective term for persons, animals, things, places, or concepts. Usually capitalised when used in a sentence.

A Common Noun is a general term for persons, animals, things, places, or concepts that doesn't require capitalisation within a sentence.

Verbs play a key part in all sentences, having two essential functions: Some verbs help clarify the subjects in significant ways, while others put stalled subjects into motion.

My grumpy old French teacher smiled at the plate of cold ham.

Ted's overworked laptop exploded in a spray of sparks.

The curious toddler popped a spider into his mouth.

Important note: Every subject in a sentence must have a verb, otherwise you will have written a fragment, which is a major writing error.

Think About Word Function When You are Looking for a Verb

Often words in the English language will have more than one job.  On certain occasions a word may be a noun, or a verb, or even a modifier, because of this you must carefully analyse the job the word is doing in the sentence.

Crisps crunch too loudly to eat during an exam.

The crunch of the crisps drew the angry glance of Professor Brown to our corner of the room.

Crunching something is what we do.  Just like we can crunch cockroaches under our shoes, or crunch popcorn during a movie, crunch some numbers in a maths class.  The first sentence tells us that crunch is what crisps do, that's we can call it a verb.

Often times crunch is a verb, but it can also be a noun.  The crunch of crisps, for example, is a thing, a sound that's made when we eat crisps.  That's why you need to examine the function that a word provides in a sentence before you decide what grammatical name to give that word.

Recognise an Action Verb When You See One

Chew! Giggle! Paint! Sing! Dance! These are all doing words expressing an action, something that a person, animal, force of nature or thing can do.  Subsequently words that these are called action verbs.

Anthony sneezes with the force of a tornado.


If you're not sure whether a sentence includes an action verb or not, look at all the words in that sentence and ask yourself, "Is this something that a person can do?"

During the summer, my basset hound constantly pants and drools.

Is during something you can do? Can you the? Can you summer? Can you basset hound? Of course not! Can you drool? Of course you can.  Therefore in the sentence above, there are two action verbs: pant and drool.

Understand a Linking Verb When You See One

Actions aren't expressed by linking verbs.  In contrast, they connect the subject of a verb to additional information about the subject.

Kevin is a computer hacker.

Ising isn't something that Kevin can do, it connects the subject, Kevin, to additional information about him, that he will soon have the FBI breathing down his neck.

During bad storms, trailer parks are often magnets for tornadoes.

Areing isn't something trailer parks do.  Are simply connects the subject, trailer parks, to something said about them, that they tend to attract tornadoes.

After receiving another failing grade in history, Michele became depressed.

Became connects the subject, Michele, to something said about her, that she wasn't happy.

A five-mile hike seems like a long distance event during a hot, humid August afternoon.

Seems connects the subject, a five-mile hike, with additional information, that it's more arduous depending on the day and time.

At restaurants, Sally always feels angry after waiting an hour for a poor meal.

Feels connects the subject, Sally, to her state of being, which is anger.

Any form of the word be (am, were, has been, are being, might have been, etc.), are all true linking verbs and will always be linking verbs.

Then you have a list of verbs with multiple personalities: turn, taste, sound, smell, remain, prove, look, grow, feel, and appear.  Their job in a sentence decides what you should call them.

Donna is the grasshopper!  I don't think so! In this sentence, tasted is an action verb.

The peanut is good?  You bet!

I smell the delicious aroma of the grilled alligator.

I am the delicious aroma? Not the last time I checked.  Smell, in this sentence is an action verb.

The aroma is appetising?  Definitely?  Come take a smell!

The students looked at the equation until their brains hurt.

The students are the equation? No of course not! Looked is the action verb.

The equation is confusing? Definitely!

This substitution will not work for appear, you have to analyse the verb function of the verb first.

Godzilla appeared in the doorway, spooking me badly.

Appear is something Godzilla can do.

Godzilla appeared happy to see me.

Here, appeared is connecting the subject, Godzilla, to his state of mind, which is happiness.

Keep in mind that verbs can have more than one part, in practice they can have as many as four parts.  A multi-part verb has a base or main part as well as additional auxiliary verbs with it.

Because Lloyd is a klutz, he is always spilling something.

Lloyd might have spilled the vanilla milkshake because the short dress distracted him.

Lloyd should have been spilling the vanilla milkshake down his throat.

How to Identify a Gerund When You See One

What is a gerund?

A gerund is a verb form which functions as a noun.

All gerunds, invariably end in ing.  However, gerunds are not easy to identify, because participles similarly also end in ing.  So what's the difference?

A gerund functions as a noun.  Therefore there will be subjects, subject complements, direct objects, indirect objects, and objects and prepositions.

A present participle, by contrast, complete progressive verbs or act as modifiers.

Here are some examples of gerunds:

Since Laura was five years old, swimming has been her passion.

Swimming = subject of the verb has been.

Swimming = subject complement of the verb is.

Laura gives swimming all of her energy and time.

When Laura wore dive fins to class, everyone knew that she was devoted to swimming.

Swimming = object of the preposition to.

Here are some examples of words that are present participles:

One day last summer, Laura and her coach were swimming at Whitehaven Beach.

Swimming = present participle completing the past progressive verb were swimming.