Homophones: The Words That Puzzle Everybody

The Words that Frustrate People the Most

The building blocks of any language are the words used. With these components we begin to put together sentences, paragraphs, essays, and eventually novels and books.  Most people rarely think about the words they're using or if they are the right ones.

A lot of people don't know how to use the English Language to its fullest,  but instead use a very limited vocabulary to progress through life.  By learning to expand your vocabulary with more commonly used words you can master the basics of writing and enhance your own understanding of the English language.


Homophones, Homographs and Homonyms and  Heterographs: What Makes Them Different?

They're all distinct, but it's the suffix of each that makes each one different, so let's take a closer look.

Why Homophones are So Confusing to Everyone

There are numerous homophones throughout the English language, it's not surprising many people are left scratching their heads when they try to use the correct word.  Take a look at some of the most frequently used homophones and the definition of each one.

These are the sound alike words, when said out loud they all sound the same but that is where the likeness stops.  A good example is the word "plate" and "plait".  "Plate" is a dish you eat off  but it can also be a special kind of knot or twist.  The definition is all about the sound.

Here are some other examples:

Ate - from the verb to eat. Example: I ate all of my dinner last night.
Eight - The number after seven and before nine. Example: She started her work before eight o'clock that evening.

Buy, Bye and By

Buy - verb meaning to purchase something.  Example: Can you buy me lunch?
Bye - Shortened version of goodbye. Example: "Bye, bye" said the little boy to his father.
By - a preposition meaning next to or near.  Example: My Favourite books is "Dracula". It's written by Bram Stoker. 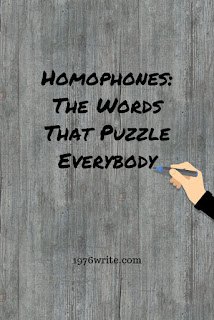 Cell - a small area or room, usually found in a prison.  Example: Ted Bundy spent all of his time in his cell.
Sell - to trade a product or service for money.  Example: We want to sell our computer, but we don't think it's worth much.

Eye - the part of  your body you use to see with.  Example: When I start reading my eyes hurt.
I - pronoun a first person singular. Example: I really hope you understand what this letter means.

To, Two and To

To - verb meaning to express motion.  Example: Where are we going today?
Too - meaning as well or also. Example: Too many cooks spoil the broth.
Two - the number. Example: Two days to go til we go on holiday.

There, Their and They're

There - a place that is not here.  Example: There is the cottage.
Their - an indication of possession. Example: Their they all are.
They're - a shortened form of they are.  Example:  They're over here.

Compliment - to flatter someone.  Example: That compliment was nice.
Complement - Something that goes well with something. Example: That dress  is a nice complement to those shoes.

Brake - Brakes on a car.  Example: The brake works fine on the car.
Break - as a noun it can signify to pause or stop, can also be used when you 'break' something. Example: They took a break before they left for town.

Course - can mean a programme of educational study.  Example: She took a course in social studies.
Coarse - something that is rough or crude.  Example: The horse hair was very coarse to touch.

Piece - a unit or portion size. Example: A piece of cake for everyone.
Peace - a feeling of contentment. Example: The country was at peace with everyone.

Homographs, the Words that Are Spelled the Same

The words with the same spelling but different meanings, for example the word  "tear" which can mean a "tear" in the eye or  "tear" a piece of paper.  The definition is all about the sound, not the spelling.

Here are some examples of homographs:

Wave - hand gesture or sea water coming into shore.
Sewer - A drain or someone who sews
Row - a line, argument or a means to propel a boat by
Moped - to be gloomy or a moped bike
Minute - something that is very small or a numerical value
Learned - past tense of learn or to be knowledgeable
Fine - to be of good quality or a levy
Evening - to smooth out or when the sun sets
Entrance - the way in or to delight
Down - to go to a lower place or soft fluff from a bird
Bow - a type of know or to stoop down
Bat - a piece of sports equipment or an animal

Similar characteristics can be found in both homophones and homographs.  They are words that are spelled and sound alike.    A quick example "pen" which can be a holding "pen" for an animal or used as an instrument to write with.

Here are some examples of homonyms:

Tire - to become fatigued or tire part of a wheel
Tender - to be gentle, or to pay money
Spring - a season of the year, or a coiled spring
Rose - to rise up, or a flower
Ream - a pile of paper, or to juice a citrus fruit
Pound - a unit of weight, or to beat
Pole - A person from Poland, or piece of metal that holds up a flag
Mean - average, or not nice
Match - a pair, or stick for creating fire
Lie - to recline, or tell a falsehood
Capital - the principal city of a state, or a crime punishable by death
Circular - taking the form of a circle, or a store advertisement
Cleave - to split, or to adhere to
Quarry - Place for mining stone, or to extract slowly
Right - to correct, or opposite of left.
Rock - genre of music, or a stone
Well - to be in good health, or a source of water

Heterographs mean "different writing" referring to words in the English language which have different spelling but sound the same.   Some quick examples are son, sun, pause, paws, knead, and need.

Here are some examples of heterographs:

Here - means in this spot or locality. Example: I'm over here.
Hear - means to detect a noise or a sound. Example: I hear a noise coming from over there.

Bear - an animal.  Example: The bear rose up quickly and ran off into the woods.
Bare - Nude or stripped. Example: The room was completely bare.

Toad - Amphibian animal.  Example: The toad sat on the log.
Towed - participle of the word 'to tow'. Example: She towed the car away.

Here - a place.  Example: The best place to be is here.
Hear - using ears to experience sound. Example: I hear a loud noise.

Two, To and Too

Two - means number two. Example: There are two of us here today.
To - a preposition, or first part of the infinitive form of the verb. Example: They went to the lake to have a swim.
Too - means in addition, or also. Example: I was too tired to continue the long walk home.

Led - means to guide or direct. Example: The evidence led the jury to a unanimous decision.
Lead - means a dense metallic element. Example: The lead pipe was very heavy to carry.