Verbs can be used to express time as well as context within a sentence.  This becomes more apparent when you want to add more information to clarify an action, or details of what might be occurring.

To help create better sentences, you need to know about Action Verbs, Transitive Verbs, Intransitive Verbs, Linking Verbs, Clauses and Phrases. because they all hold up the subject of a sentence.

By expanding your knowledge of verbs, you'll enhance your writing, and be able to express what you mean more freely.  Many writer's end up using just simple action verbs, which can often leave a sentence feeling clumsy and strained.

Give your writing a new lease of life and start experimenting with verbs.  Study your favourite writers and get a flavour of how they make use of verbs.
Action Verbs

Action Verbs also known as dynamic verbs articulate whether an action is physical or mental, clarifying what the subject of the sentence has done or is doing.

Words like watched, ate and baked are verbs that people do.
If you're unsure about action verbs, take a closer look at all of the words used in the sentence. Say to yourself "Can a person, animal, place, thing or idea actually do this?". If the answer is yes then that is an action verb.

You can use Action Verbs with or without a direct object. These are called Transitive and Intransitive Verbs.

Transitive verbs can be placed with an object, noun, phrase or pronoun and refer to the person or thing that receives the action of the verb.

Example: The heating engineer will fix the broken boiler soon.

The direct object is the broken boiler.

Intransitive verbs don't need a direct object to state their meaning. They are achieved by an infinitive, adverb, adjective, preposition or gerund. Contrary to transitive verbs they don't require a receiver of the action of that verb.

Example: The President waved to the crowds.

Also known as copulas or copular verbs they link two parts of a speech, which usually involves two nouns (one subject and one complement). Accepted forms of "to be" are usually used: Am, is, is being, are, are being, was, was being, were, has, has been, have been, will have been and had been.

Example: I was a tap dancer when I was younger.

The Active and Passive Voice

When the active verb is used the subject performs the action that is signified.

When the passive voice is used the subject is being acted upon.

Example: Six hamburgers must have been eaten by that man.

With more changes and words added, the passive voice can be harder for the reader to decipher. A richer, more conversational voice comes through when the active voice is used. In everyday language the active voice is used more routinely, this is why it's preferred by many writers. The Passive Voice can be used to draw attention to the action of the sentence instead of the person doing the action.

Sentences become more exciting when the passive voice is used. Even though it's grammatically sound and correct, it can be too formal and dated. Mostly carried out in academic writing, literary prose and poetry, where the writer wants to be detached or distanced from the work at hand. Try and recognise the genre and audience your writing for when selecting your writing voice. 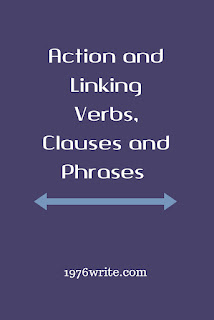 Wine spilled over the glass and splashed onto the counter.

Important note: Every sentence must have at least one main clause, if it doesn't, you end up with a major error.

As wine spilled over the glass and splashed onto the counter.

Because my cat loves cheese.

Take a look at these revisions that relate to the clause above:

Carl ran for the paper towels as wine spilled over the glass and splashed onto the counter.

Because my cat loves cheese, she never meows at the postman.

Usually relative clauses start with a relative pronoun (such as that, which, whose, whom, or who) or a relative adverb (why, where, or when).

Whom Mrs Black hit in the head with a blackboard eraser.

Where he chomps and dribbles with great enthusiasm.

Just like subordinate clauses, relative clauses cannot stand alone in a complete sentence. They must be connected to main clauses to finish the thought.

Check out these revisions of relative clauses above:

The lazy people whom Mrs Black hit in the head with a blackboard eraser soon learnt to keep their complaints to themselves.

My cat Alice, who loves cheese, eats it under the kitchen table, where she chomps and dribbles with great enthusiasm.

Carl ran to get paper towels for the wine that had spilled over the glass and splashed onto the counter.

It can be a tricky job punctuating relative clauses. A decision must be made as to whether the relative clause is essential or nonessential and then commas must be used accordingly.

Here is an example:

A cat that eats too much cheese will soon develop cheese breath.

However, if we revise cat and choose more specific words instead, the relative clause then becomes nonessential and does require commas to separate it from the rest of the sentence.

Here is the revision:

My cat Alice, who eats too much cheese, has developed cheese breath.

All clauses that function as a noun become a noun clause:

You really do not want to know the ingredients in Aunt Mary's broth.

By replacing the noun ingredients with a clause, we have a noun clause:

You really do not want to know what Aunt Mary adds to her broth.

What Aunt Mary adds to her broth = noun clause.

Two or more words that do not contain the subject-verb pair necessary to form a clause is a phrase. Phrases can vary in length, and can be very short or very long.

After creeping down the stairs and across the road to scare nearly to death Mrs. White busy cutting back her rose bushes.

Absolute phrases combine nouns and participles with any accompanying modifiers or objects. The arrangement looks something like this:

Her brow knitted in frustration.

His fingers floating over the piano keys.

Fingers = noun, floating = participle, his, over, the piano keys = modifiers

Our eyes following the curve of the ball.

Eyes = noun, following = participle, curve = direct object, our, the, of the ball = modifiers.

Her brow knitted in frustration, Mary tried again to iron a perfect crease in his pants.

Eleanor played the difficult composition, her fingers floating over the piano keys.

We watched Paul launch a difficult pass to his fullback, our eyes following the curve of the ball.

Who or Whom? Which One is Correct?

Who/Whom wrote on the blackboard?

He wrote on the blackboard. Therefore who is correct.

Who/Whom should I sing for?

Should I sing for him? Thereby whom is correct.

We all know who/whom sang last night at the concert.

The above sentence contains clauses: we all know and who/whom sang last night. The second clause, who/whom is the we're interested in. She sang last night at the concert, hence who is correct.

Important note: This rule is used because people have a weird obsession with whom, at times it seems like whom is used as a form of competition, and is used to make text look more sophisticated.

Whoever or Whomever? Which One is Correct?

Similar to the previous section the he/him rule is still used.

he = whoever
him = whomever

Rule 1. Regardless of the rest of the sentence, use whoever or whomever to conform with the verb in the dependent clause.

The prize should be given to whomever/whoever wins the race.

He wins the race. Therefore, whoever is correct.

We will take on whoever/whomever is the most capable.

He is most capable. Therefore whoever is correct.

Rule 2. Analyse the clause to decide which is correct, whoever or whomever, especially when the clause is the subject of the verb following the clause.

Whoever is selected will serve the company for three years.

Whomever you select will serve the company for three years.

Whomever is the object of select. Whomever you elect is the subject of will serve.

Recommendation: People like to use whomever because it's a popular word, many end-up using it haphazardly in order to sound more refined, thinking most people won't know any better.

Who, That , Which? Which One is Correct?

Rule 1. People are sometimes referred to as who or that. That and which pertain to groups and things.

Harry is the one who saved the dog.

Emily is on the team that won first place in the race.

I do not believe food that claims all natural ingredients because this phrase can mean practically anything.

We don't know the types of food being discussed without that clause.

Rule 2b. Which introduces an unnecessary clause, which adds additional information.

The food claiming all natural ingredients which appeared in the Daily Mail newspaper, is on sale today.

The food is already detected, and therefore which begins an unnecessary clause that contains additional, but not crucial, information.

Rule 3. If that has already been used in a sentence, writers will often use which to present the next clause, regardless if it is essential or nonessential. This occurs to bypass awkward formations.

That which doesn't kill you makes you stronger.

This sentence is a better choice to the clumsy but technically correct That that doesn't kill you makes you stronger.

Important note: The difference between that and which, though a useful recommendation, is widely overlooked.

Rule 1. Use conclusive instead of unclear language.

Unclear: The wind was of an extreme nature on the West Coast.
Annoying questions such as, when did this extreme wind occur? Which area of the West Coast was hit by this wind?

Rule 3. Stay away from using there is, there are, it is, it was etc.

Rule 6. Word order is essential to sentence building, it can make or break a sentence. A sentence such as Forgotten by history, with an incomplete phrase or clause must be followed closely by the person or thing it describes. Moreover, the person is always the main subject of the sentence. Not following this rule results in the all-too-familiar dangling modifier.

Dangler: Forgotten by history, his memoir was worthless.
The problem with this sentence is his memoir shouldn't come right after history, because he was forgotten, not his memoir.

Correct: He was forgotten by history, and his memoir was worthless.

Rule 7. Descriptive words and phrases should be placed as close as is feasible to the words they modify.

Not advisable: I have a cookie that Lucy baked in my lunch box.

Cookie is too far from lunch bag, making the sentence confusing and silly.

Better: In my lunch bag is a cookie that Lucy baked.

Rule 8. Sentence fragments are usually an error, or a bad idea. Often only occurring when a phrase or dependent clause, but are missing an indpendent clause.