What You Need to Know About Verb Tenses and Forms

Verbs can accurately tell you at what time something has taken place or when something existed or come to pass.  These are performed by three main tenses: past, present and the future.

By incorporating different tense forms in your sentences you can give the reader an indication when something has occurred or existed in time.

It takes time to grasp all of the tenses, but the simple tenses are pretty easy to understand.  Once you comprehend how to use progressive, perfect, and perfect-progressive forms you can start to generate a frame of reference for your own writing.

Don't be afraid of the tenses, they're all just a variation of the same thing.  Things will come naturally once you understand their basic forms.
Verb Tenses

The English language uses verb tenses to tell you when a person has performed an activity, or shows a state of being.

An ongoing situation or action that is true at that moment.

Example: Robert watches one TV programme at the weekend. 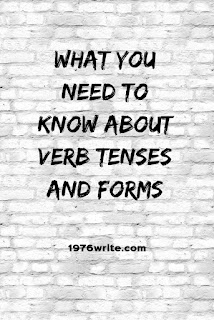 An action completed in the past, the basic form of verbs usually ending in –ed.

Example: I used the car yesterday to get to work.

An action completed in the future, sentences often contain 'will' or 'shall'.

Example: The President of the company will be arriving next week.

An action occurring at the time the statement was written down.

An event or action that was taking place over a specific time, and continuing and this moment in time.

Example: I had been playing tennis for two hours when mum told me to leave.

Example: I will have been playing badminton for two hours, and will badly need a rest.

An action that occurred at an ambiguous point in time.

Example: Everyone has seen the movie by now.

An action or event that takes place before that action/event.

Example: Suzie cleaned her room before her parents came home.

Expressing an action that will happen in the future before another event occurs.

Example: Katy will have finished her college work by lunchtime.

An activity that was started in the past, continues on in the present, and may go on in the future.

Example: They have been calling the shop since last week.

Expressing an action that was done in the past, and finishing before another action in the past.

Example: That bell had been ringing for forty minutes before Sandra finally answered it.

An event, or continuing action that will happen before a specific time in the future.

Example: It will have been raining for three days by the time it stops.

Irregular verbs are verbs that can be found in simple past and past participle forms.  Considered irregular because they aren't formed properly by adding –ed at the end.  Composed in a variety of different ways without any particular pattern.  Often created using –en, in other occurrences there are no letters added at the end, instead, a few letters are dropped.  In the most confusing circumstances they change their spelling when transformed into simple past and participle forms.

Writers often mistakenly add the wrong ending to an irregular verb for example, 'chose' does not become 'chosed' in the past tense, but simply stays as 'chose'.  Just like the past participle form of 'fly' is not 'flewn' but 'flown'.