What You Need to Know About Grammar

The whole system and structure of a language or of languages in general usually taken as consisting of syntax and morphology (including inflections) and sometimes also phonology and semantics.
When these rules are no longer used they fragment off into dialects, and in the course of time form a new language.
Early Beginnings

Through the Roman Empire, in Western Europe Latin was taught and became the lingua franca, grammar was established to help teach people Latin. Despite the harshness of Roman rule people all over Europe would communicate using Latin no matter what their native tongue was. When the Roman Empire fell Latin stayed, and was widely used by literate Western Europeans who had been taught how to use it. Later on it became the authoritative language of the Roman Catholic Church. 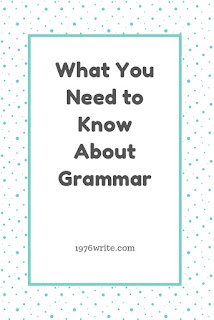 After the Collapse of the Roman Empire

By the eighth or ninth century the spoken language of Rome had changed. The classical speakers who used church Latin had all but disappeared, under the Western Church it started to thrive and went on to be used in fields such as international politics and European literature.

The Root of Grammar

Conversational Latin no longer existed, and educators began teaching Latin according to its patterns, using words that are related to each other and started forming sentences. This grew and developed into the grammar we no today and use in the craft of writing.

Etymology of the Word Grammar

From the Greek word grammatikē technē, which means "the art of letters".

Over the years the system for analyzing grammar has become codified. Making it useful for two reasons: People could understand old Latin documents; Second, writers who knew Latin could communicate with each other despite their native tongue, and be understood in schools across Western Europe where Latin was taught according to these same rules.