Making Improvements to a Sentence at Word Level (Part 1)

Creating sentences that flow is no easy task, so we're going to take a look at how you make your sentences more cohesive by looking at the six main areas you can improve on:

You'll probably find that most people follow a uniform pattern in their speech and writing of subject-verb-agreement.

For example, he writes, she laughs.  That is to say that we all have our own personal way of adding -s or -es on a verb when it's in the present tense.  If you're using your own particular system, other than that of the standard, you might want to start adjusting your writing style.

What are the Standard Rules?

Subject-verb-agreement becomes more of a problem when it's done in the present tense.

Let's take a look at the standard rules.

1. Subjects and Verbs Must Agree in Number.

2. Words Between Subject and Verb

3. When Starting With "Here" or "There", the Subject is Always Placed After the Verb.

4. Identify the Subject Properly Before You Decide on the Verb Form Used

5.  Subjects Joined by "And" Require a Plural Verb Form

6. A Singular Verb is Used if the Two Subjects are Separated by "And", and Refer to the Same Person or Thing as a Whole

7. If the Words Each, Every, and No Comes Before the Subject, the Verb is Singular

9. When Using Singular or Plural Subjects Connected by Conjunction

10. When Units of Measure

11. When Using the Object of the Preposition

15.  Titles of Books are Normally Treated as Singular Using a Singular Verb

Rules to the Exception

There are exceptions to the rule, one includes the word I and the other involves the word you.  When using the I and you as subjects they will always appear as base verbs.

Despite the fact that I can be singular and you can sometimes be either plural or singular in meaning, each pronoun will agree with a base verb.

Knowing when to use a -d or -ed ending on the ends of regular verbs or adjectives made from them can be a little bit tricky.

You need a firm understanding of the use of regular and irregular verbs, and whether -d or -ed are required.

Some words don't follow this nice smooth pattern, these verbs are irregular verbs.

If you're not already familiar with the term participle, this simply means a word that is formed from a verb is then used as an adjective or to form verb tense, and more likely ends with -ed, -d, -t, -en, or -n.

Here are examples of -d endings that have been added to the regular verb purchase:

I have purchased the car.

He has purchased the shopping mall.

She had purchased the licence only forty-five minutes before the wedding.

The tainted medicine was purchased in a pharmacy three miles from the victim's home.

Fifteen square acres in the middle of the city were purchased by an international corporation.

Three Hot Spots to Think About

Usually when a writer abandons the use of -d and -ed endings, they will drop them on past tense verbs, past participles, and adjectives that are formulated from verbs.

Here are the three hot spots think about:

Yesterday the doctor prescribed an antibiotic medication for John. (past tense)

Another specialist has prescribed treatment for him on several occasions.  (past participle)

The prescribed capsules were very effective.  (adjective derived from a verb)

Most people would find (a) to be the easiest because the word yesterday is the clue for the past tense, which helps writer's remember to add -d to prescribe.

There are no clues as to context in (b) and (c) for the past tense.  The clue for adding -d comes in the helping verb has.

Spelling Rules You Need to Remember

2. Words ending in a constant that are preceded by a short vowel, you would normally double the consonant before adding -ed.

The list has been laid out so that each verb has a present, past, and past participle form.

become, became, have become
begin, began, have begun
break, broke, have broken
bring, brought, have brought
buy, bought, have bought
build, built, have built
choose, chose, have chosen
come, came, have come
do, did, have done
drive, drove, have driven
eat, ate, have eaten
fall, fell, have fallen
feel, felt, have felt
fight, fought, have fought
find, found, have found
forget, forgot, have forgotten
forgive, forgave, have forgiven
get, got, have gotten
give, gave, have given
go, went, have gone
grow, grew, have grown
keep, kept, have kept
know, knew, have known
lead, led, have led
leave, left, have left
lose, lost, have lost
make, made, have made
meet, met, have met
pay, paid, have paid

When to Use a Verb-Tense Shift

Sometimes writers choose to write in a different tense, this is when a verb-tense shift occurs.  The tense refers to the preferred time frame for example; past, present, or future.  A verb-tense shift can be done when you're writing any sentences, or paragraphs.

Is it wrong to use a verb-tense shift?

Often verb tense-shifts within a paragraph or piece of writing can be really useful, and can help tell a story or bring across a message.

When I opened the door, Katie was standing there in the pouring rain.

Different things are being said by the verbs opened and standing.  The action of the door opening was over pretty quickly in the past.  Although the verb standing tells us that Katie was already standing at the door when it opened, but may not be standing there once the door opens.

With the verb tense shift in the sentence, what we have is important information about the exact actions and what happened in conjunction with one another, and whether or not those actions were in progress or if they were only done once and never again repeated.

There are different reasons for verb tense shifts; literary writer's may utilise them for different settings or characters points of view, or to identify between descriptive passages, or characters dialogue.  They may be used by academic writers to quote or paraphrase secondary sources corresponding to various style guides, such as the MLA and APA.

Verb tense shifts may be accidental in nature by the author, making it confusing to the reader.  If you don't need a verb-tense shift it's best that you don't use it, because it very often is interpreted as an error. 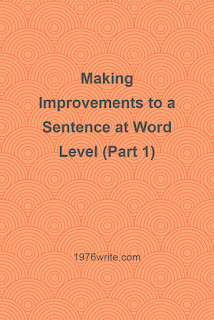 How to ascertain if you have a verb-tense shift

To identify a verb-tense shift you need to ascertain which verbs are being used the same as those being done by the recipient in the sentence.

When I opened the door, Katie just stands there in the pouring rain.

In the above example two verbs have been identified, these are acting on subjects and have tenses.  That is to say we can determine where on a timeline from past to present to future each of these actions happened.

Next we need to determine if the verb tenses in the sentence(s) are the same or different.  This can be done without knowing all of the grammatical tenses.  Decide if the tenses are different by determining whether the two actions happened at the same point in time or if they happened at different points on the timeline.

When I opened (past, over and done with)

Each of these verbs at different points on the timeline of actions in the sentence, this is how you know that you have different tenses.  So this sentence does contain a verb-tense shift.

You now need to decide whether the verb-tense shift should be amended.

How to amend a verb-tense shift

If your sentence isn't communicating the right time shift, you need to revise your sentence, so that the verb tenses are consistent.

When I opened the door, Katie stands there in the pouring rain.

The above sentence needs revising because it confuses the reader as the door being opened takes place in the past, while Katie is standing there in the present.  Putting these two actions in such a manner this particular timeline makes no sense.

To amend this sentence properly you need to decide whether the verb tenses should take place in the past or present, this relies on what is required in your writing.

When I opened (past) the door, Katie just stood (past) there in the pouring rain.

When I opened (past) the door, Katie was standing (past) there in the pouring rain.

In the above examples each amendment of verb tenses is either a version of the past or present tense.  Eliminating the verb-tense shift.

Using apostrophes can be confusing, but there are two simple rules to follow when you want to use them:

1. Apostrophes are used to show someone owns or is a member of something.

Names ending in "s" can vary depending on the preferred style being used.  Either way, it's still correct to add another "s" to create a possessive form, and it's also acceptable if you want to put an apostrophe at the end of singular nouns that end in "s" to make them possessive.

Which means you can demonstrate possession for Thomas in these two ways:

2. Can be used at the end of a plural noun to show possession

In this case it's not neccessary to add another "s" at the end of a possessive plural noun.

3. Can be used if plural noun doesn't end in "s", you can add an apostrophe then "s" to create the possessive form

Always remember a possessive noun requires an apostrophe and an "s" at the end.  If an "s" is already there just add an apostrophe.  If there's no "s", simply add both.  Apostrophe first, then the "s".

When two people have ownership of something, things can be a bit more tricky.  It's all down to ownership.

If the object is owned by both parties, you can add the possessive to the final one.

Things change when separate versions of the same item are owned by both parties, then you make both owners possessive.

When two words are combined to make a contraction, you always take away some letters, and in their place you put an apostrophe.

Understanding Infinitives
A Sequence of Words: Constructing a Sentence
Sentence Linking: Essential Strategies: To Solve Your Sentence Problems
Using Punctuation in Sentence Combinations
How to Fine Tune a Sentence
Making Improvements to a Sentence at Word Level (Part 1)
Posted by Helen Bolam at Monday, February 07, 2022