How to Identify an Infinitive When You Find One

Infinitives nearly always start with to followed by the simple form of a verb:
To + Verb = Infinitive

You can use infinitives as adverbs, adjectives, or nouns.
For example:

To rest is the only thing Laura wants after her shift waiting tables at the local restaurant.

To rest serves as a noun because it is the subject of the sentence.

No matter how interesting the operation is, David turns his head and refuses to look.

To look works as a noun because it is the direct object for the verb refuses.

Wherever Billy goes, he always brings a book to read just in case conversation slows or he has a long wait.

To read acts as an adjective because it modifies book.

Sally braved the rain storm to throw the smelly fish tail into the bin.

To throw behaves as an adverb because it demonstrates why Sally was out in the rain storm.

You'll nearly always find infinitives starting with to. However, there are some exceptions. Infinitives lose their "to" when certain verbs are used. This happens when these verbs; feel, hear, help, let, make, see, and watch are used.

As soon as Harriet felt the rain splatter on her skin, she knew it was a good excuse to return the lawn mower to the garage.

When Thomas heard the alarm clock buzz, he hit the snooze button and went back under the covers for five minutes of sleep.

Helping = special verb; us = direct object; understand = infinitive minus the to.

Since John had destroyed Sally's spotless kitchen while baking cheese scones, she made him take her out for an expensive dinner.

Made = special verb; him = direct object; take = infinitive minus the to.

Hoping to lose his fear of flying, Robbie went to the airport to watch passenger planes take off and land, but even this activity didn't convince him that jets were safe.

Should You Split an Infinitive?

The rule of thumb is that no word should come between the to of an infinitive from the simple form of the word that follows. When a word does divide these two components, it results in a split infinitive. 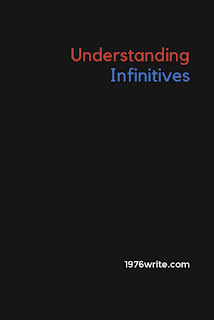 Wrong: Michael hopes to quickly finish his physics homework so that he can return to the more interesting Dean Koontz novel he had to abandon.

Right: Michael hopes to finish his physics homework quickly so that he can return to the more interesting Dean Koontz novel he had to abandon.

For many English teachers splitting infinitives can feel more like sacrilege. In their eyes, it's equivalent to stealing, dishonouring one's parents, or even killing.

The split infinitive, to other people, can seem more like a development, and not an error. Believing that split infinitives are perfectly okay, particularly in informal writing.

When you're deciding on whether or not to split or not to split, think about your audience. If you're writing a formal piece of writing you can organise the words to avoid splitting the infinitive. If you're happy with the split infinitive, and feel its presence won't hurt your writing, leave it alone.