A Review of Commas in Compound and Complex Sentences

A quick reminder of the coordinating conjunctions:

Important note: When you're writing a compound sentence you insert a comma before the conjunction that joins two clauses.

You may have been taught that it's okay to exclude the comma if the clause in a compound sentence is short.  However, for ease and to strengthen a point you should still insert a comma in all compound sentences.

Something else to bear in mind is that you don't need to put a comma before every and or but you come across in a sentence.  Always ensure there's a clause both before and after the conjunction.

After, because, that, whenever, although, before, though, where, as, if, unless, while, as long as, since, until, wherever, as soon as, so that, when, why.

Erin loves her brother, and he loves her too because she pays his bills.

The dog ran off when I chased him, but I didn't care.

Edgar Degas, who was born in 1834, was one of the founders of impressionism but he rejected the term.

A classic embedded sentence which starts with two commas after who was born in 1834.  The subject is clearly Edgar Degas, but these things don't need to be put in any particular order for you to know what the sentence is all about.  That's because the sentence comes with the information you need to know about the subject.

Important note: If the subject is easily identifiable add two commas.  If you need to make sense of the subject of the main clause don't use any commas.

(a) The boy, who knew that his mother was about to arrive, ran quickly towards the opening door.

(b) After the French and Indian war, George Washingon married the wealthy Martha Custis, and he spent the years before the American Revolution enjoying the life of a southern gentleman.

(c) I have a wide variety of supernatural powers but wish I had the power to go out in the daylight.

Sentences (a) and (b) need two commas, but sentences (c) and (d) require no commas.

Always keep your eyes on the subject of the main clause, you don't need to see how important the embedded clause is in the relationship to the entire meaning of the sentence.

The Contrast Between That and Which in a Sentence

Commas are usually required in a sentence with an embedded clause beginning with which.  Normally using two commas because the information given isn't normally that clear and specific.

A sentence including that doesn't require any commas because it contains an embedded clause that starts with that.

The carpet which you bought has moth damage.

Please accept my resignation.  I don't want to belong to any club that will accept me as a member.

Whose, a Relative Pronoun

Whose not unlike its cousin who can work in very much the same way, it can work with two commas or no commas within the sentence.  It depends on whether the embedded clause is needed to make sense of the subject of the main clause.

Employing Commas to Start Off Phrases

With a red shirt

Because of her glittering smile

He wants to become an engineer

I waited for her

When the saints go marching in

He laughs at shy people

While getting ready for bed, Carol heard a knock at the door.

Galloping quickly, the horse reached the other side of the pasture in less than a minute.

All Of Your Sentences Should Be Readable

Ask yourself will my readers understand my message if I add this punctuation here, will it make sense to them?

Using Commas to Separate Items in a Series

Items can be easily separated with the help of a comma, and this can be used to separate just about anything.  You can use commas to separate adjectives, verbs, nouns, prepositional phrases or any other kind of grammatical unit.

You can add an and in the last two items, but this can be optional, and makes a sentence more readable.

If you have difficulty telling the difference between a cumulative or coordinate adjective in your sentence, put an and between them.

We walked down the long and narrow path. (incorrect).

We walked down the long, narrow path. (correct).

Both sentences that include coordinating adjectives work equally in modifying the noun, and do this independently, which is why it makes sense to use and between them.

A Recap on How to Use Commas

1. Separate Independent Clauses With a Comma

When joining to complete ideas, use a comma before a coordinating conjunction (an, but, yet, so, or not).

You can go shopping with me, or you can go to a movie alone.

2. After an Introductory or Phrase a Comma Can be Used

A comma lets the reader know the introductory clause or phrase has ended and that the main part of the sentence is about to begin.

When Evan was ready to iron, his cat tripped on the cord.

3. Use Commas to Separate Items in a Series

This can be three or more items which have the same function and form in a sentence.

David, who spent the last three days fishing, is back on the job again. (nonrestrictive)

The gentleman who is standing by the fireplace is a well-known composer. (restrictive).

5. Set Off Appositives With a Comma

The New England Patriots, the underdogs, surprised everyone by winning the Super Bowl. (Appositive).

The poet Pope is famous for his monologues.  (No appositive).

6. Using Commas When Addressing Someone in a Sentence

A comma is used in a sentence to address the person speaking.

I think, John You're wrong.

7. Commas to Set Off Direct Quotations

A dialogue between two or more people, if the speaker in the conversation is identified, and not the listener.  His name, noun or pronoun referring to the speaker, and the verb that also pertains to the speaker are enclosed in commas.

"I dislike concerts because the music is too loud," she said.

Year is set off with a pair of commas.

Elements of an address are separated by commas.

John Lennon was born in Liverpool, England, in 1940.

Titles following a name separate the title from the rest of the sentence with a pair of commas.

Sandra Belinsky, MD, has been appointed to the board.

Numbers of more than four digits long, use commas to separate numbers into groups of three. 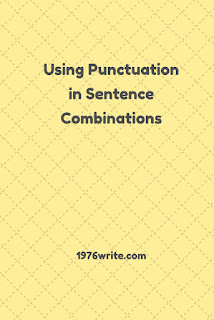 Utilising Colons and Semicolons in a Sentence

Colons can be used to show that something is following, like an example or quotation.  Semicolons are  usually used when you join two independent clauses together, or complete thoughts that could stand by themselves as complete sentences.

So let's take a quick look at the three main uses for colons in sentences.

There are two choices at this time: run away or fight.

He wanted to see three cities in Italy: Rome, Florence, and Venice

This was first said by Shakespeare: "To thine own self be true."

Never forget this point: think before you speak.

Gary wanted to know why I didn't respond to his text: I hadn't received it.

I had a huge meal; however, I am already hungry again.