Making Improvements to a Sentence at Word Level (Part 2)

For some writers, pronouns can be problematic.

What is a pronoun?

Pronouns such as I, me, he, she, herself, you, it, they, that, each, few, many, who, whoever, whose, someone, everybody, all of these can be used to replace a noun.

Here are some rules to follow when you're using pronouns in a sentence.

1. Subject pronouns are applied when the pronoun is the subject of the sentence.

I, he, she, we, they, who, whoever, are all pronouns and can be applied.

2. Subject pronouns are often used if they rename the subject.

It is she.
This is he speaking.

Quick note:  More commonly used phrasing that people tend to follow to be verbs with object pronouns like them, her, me.

3. When using who to refer to a personal pronoun (they, we, she, he, you, I), it requires the verb that agrees with that pronoun.

5. Depending on the subjects the pronouns who, that and which can become plural or singular.

She is the only one of those women who is always on time.  (Who refers to one, therefore a singular verb is used).

Each of the boys talks well.
Either of us is capable of doing the job.

The exception to the rule 1. Singular pronouns I and you take the plural verbs.

The exception to the rule 2.  When each is used in certain sentences it is not a subject, rather an adjunct which illustrates the true subject.

7. Possessive pronouns like his, hers, its, ours, and yours don't need apostrophes.

It's been a warm evening.
Keeping oneself prepared is important.

9. Reflexive pronouns such as myself, yourself, himself, herself, itself are normally used when the subject and the object of a verb are the same person or thing.

Use a reflexive pronoun when the object of the preposition refers to the previous noun or pronoun.

David bought it for himself.

Words that Cause Trouble for Writers

Just because your spellchecker tells you the word is spelt right doesn't mean it's the right word you're using.  The English language can be baffling to an English speaking native, and many words can be easily misused because they share similar meanings.

Let's take a look at some of the most typically misused words.

Accept - to agree
Except - not including

Advice - a recommendation about what to do
Advise - to recommend something

Aisle - a passage between a row of seats
Isle - an island

All together - all at once
Altogether - on the whole

Aloud - out loud
Allowed - something that is permitted

Altar - a sacred table in a church
Alter - to change something

Appraise - to assess something
Apprise - to inform someone

Aural - in relation to the ears or hearing
Oral - relating to the mouth, or something spoken

Balmy - pleasantly warm
Barmy - to be foolish or crazy

Bated - in great suspense
Baited - to attach bait or inserted

Born - having started life
Borne - to be carried

Complacent - to be smug or self-satisfied
Complaisant - willing to please

Complement - an addition that improves something
Compliment - to express approval

Currant - a dried grape
Current - a flow of water or electricity, or something happening now

E.g. - is an abbreviation of example
I.e. - means that is 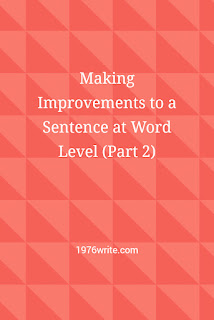 1. Always capitalise the first letter in a sentence.

An uncomplicated rule of capitalisation and the easiest to remember.  Every time you start a new sentence, capitalise the first word.
Example:
A day without sunshine is like night.
2. Always capitalise proper nouns and adjectives.

This means particular places, people or things should be capitalised.

3. Always capitalise the pronoun I.

No matter where the pronoun I is in a sentence it should always be capitalised.

Lee and I are going to the cinema later tonight.

Creative works usually require capitalisation in their titles.  You capitalise the following words:

5. Always capitalise the first, last word and every other word except conjunctions, prepositions in quotations.

Richard said. "In that case, I'm going for a jog!"

"Keep smiling, because life is a beautiful thing and there's so much to smile about." - Marilyn Monroe

6. Always capitalise the first, middle and last letter of a person's name, and also suffixes.

You can use the same rule for family titles such as "Uncle Matthew"; however, if you're not using the title as a name you don't need to capitalise it.

Another example of initials is when someone (usually famous) goes by their own initials instead of their name.

All calendar days, months and holidays are capitalised.

9. Always capitalise when closing a letter

When you end a letter you usually end it with some kind of farewell.

Yours sincerely
Yours truly
Regards
Warm regards
Yours respectfully
Sincerely

Understanding Infinitives
A Sequence of Words: Constructing a Sentence
Sentence Linking: Essential Strategies: To Solve Your Sentence Problems
Using Punctuation in Sentence Combinations
How to Fine Tune a Sentence
Making Improvements to a Sentence at Word Level (Part 1)
Posted by Helen Bolam at Monday, February 14, 2022