How to Fine Tune a Sentence

On entering the room, a spider caught my eye.  (Incorrect).
(Nobody entered the room, which means no spider or eye came in).

After following a rigid diet, his weight dropped quickly.  (Incorrect).
(In this sentence nothing followed a rigid diet).

Writers tend to get carried away quite easily and assume the thing they're talking about is obvious just by the context, and therefore forget to mention it.

Having read your letter, we will keep your dog indoors until the birds fly away.  (Correct).

Packing my gear into four huge cases, my little Border Terrier could tell a long trip was coming.  (Incorrect).

(As you can see in the sentence nothing packed the gear into the cases, hence, "Packing my gear into four huge cases" is the dangling modifier and doesn't pertain to anything).

Packing my gear into four huge cases, I knew my little Border Terrier could tell a long trip was coming.  (Correct).

Faulty parallelism makes your writing sound awkward, rendering sentences unreadable, and destroying any clear message the writer may have had.

What is Faulty Parallelism?

The construction of two or more parts of a sentence can be equivalent in their meaning but not grammatically similar in form.  A correctly crafted sentence should match nouns with nouns, verbs with verbs, and likewise phrases and clauses with similarly constructed phrases and clauses.  Thus ensuring that a sentence reads smoothly, and the audience knows the meaning, and that they aren't confused by unequal parts.

Observe the incorrect comparison of occupations "engineering management" and "software development"  to people working as "service technicians" and "sales trainees".  Ensure that each element in a series is similar in form as every other element mentioned in the series.

Karen had to iron, do the washing, and shopping, before her parents arrived.   (Incorrect).

The sentence is incorrect because it contains three different verb forms instead of the same form for each part of the sentence.

Karen had to do the ironing, washing, and shopping before her parents arrived.  (Correct).

Why is Parallelism Used in Text?

Parallelism is an important part of a writer's arsenal, and can be used in a variety of different ways:

To highlight the relationship between two or more sentences in a paragraph or two or more ideas within a single sentence.

The list above is a perfect example of parallelism, with an easy to read grammatical structure, each line identical, and every line beginning with the verb "to".

Sentences can be really awkward if they're written in a passive voice because it sounds flat and weak to the reader.  This is why the reader is trying to discover the meaning of what's going on within that particular sentence.

At dinner, five prawns were eaten by Henry.

The savanna is roamed by beautiful gazelle's.

The flat tire was changed by Jane.

The entire stretch of road was covered by the crew.

The whole house was painted by James.

The floorboards were eaten away by woodworm.

Good Reasons to Use a Passive Sentence

People prefer the sound of an active sentence to a passive one, however if you like the sentence you've written there's no reason why you shouldn't stick with it.  (Sounds paradoxical, I know).

The document had been released into the public domain.
(This sentence clearly hides the blame).

2. Passive sentences can be used to show a neutral or objective tone.

It is anticipated that concessions will be offered by both parties.
(This passive sentence conveys a neutral tone).

3. Passive sentences are suitable when the executor of the action is unknown, unimportant or obvious.

Pineapples are grown in Costa Rica.
(The executor of the action is unimportant).

4. Passive sentences enable you to put something you want to highlight at the beginning of your sentence.

An estimated 390,000 people are injured or killed in mobile phone related incidents.
(The number of people is the focus of this sentence).

5. A passive sentence structure allows you to use the same subject twice.

David crashed into the barrier and was tossed in the crowd.
(The subject "David".  The verb "crashed is an active verb.  Followed by "was tossed," which is a passive verb.  This structure enables you to say two things about "David" in a natural and logical way).

There are two types of quotation marks, or inverted commas, single ('') and double quotes ("").  This is because as a general rule in British usage it is usual to use single quotes.   However, in more recent times double quotes have become more commonly used.  Double quotes come with their own advantages, as seen below:

An indirect quotation can also be called an indirect discourse or indirect speech, and can be used when relaying what someone else has said.  Thus providing a summary and allowing you to paraphrase instead of giving it verbatim.

Important note:  When you're quoting someone it's important to realise that what's placed inside of the quotation marks are the exact words of the person, everything else should be placed outside.

My wife said that she needed to go to the store. 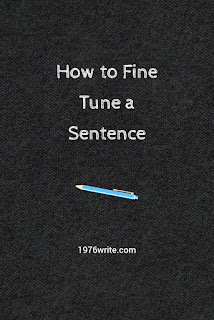 How to Punctuate a Direct Quote

Can be used when you're using verbs or verb phrases, and frequently used to introduce quoted material.

Often a writer may choose to interrupt a direct quote.

"The best investments today", according to Jones, "are commodities and emerging market stocks".

In this kind of sentence the quotations are enclosed within a set of double quotation marks, that are set off by two commas.  A period and capital letter should be used if the two sections are two full sentences.

Colons are used when the text introducing the material can stand on its own as a sentence.  More commonly used as a mark to introduce a block quotation.

In Food Rules, Michael Pollan summarises his extensive writing about food with seven words of advice: "Eat food.  Not too much.  Mostly plants."

Sometimes quoted material will come directly from your introductory text, this is where no punctuation is needed before the quotation.  Also a very short quotation may be introduced without punctuation.

How to Improve Your Writing Vocabulary
Understanding Infinitives
A Sequence of Words: Constructing a Sentence
Sentence Linking: Essential Strategies: To Solve Your Sentence Problems
Using Punctuation in Sentence Combinations