Sentences are made up of different parts, from where punctuation is placed, to the order of words.  We're going to take a look at some strategies you can start using to combat these problems.

Conjunctions can be easily linked using combine clauses.  The most commonly used are:

Only two things are infinite, the universe and human stupidity, and I'm not sure about the former.  Albert Einstein, 1879-1955.

It's interesting to note that a comma is used in a compound sentence, usually placed after the first clause, but before the conjunction.  Don't always expect the comma to be used before and, but, for, nor, or, so, and yet.

New teaching graduates are often excited but apprehensive about the next phase of their lives.

Commas aren't needed in the above sentences because and and but are used to connect clauses.

Quick Note:  As we've seen you can often use coordinating conjunctions to connect independent clauses, but you can also use them to connect more than two clauses within one sentence.

At the age of 25, David Kent of Louisiana found out about his incurable cancer but he lived another 35 years and in that time became one of the century's most powerful and effective U.S. senators.

Another simple technique of sentence combination is complex sentences.  They help provide your sentences with variety, and can be used in two different sequences.  The conjunction is situated between the clauses, just like a compound sentence.

The football match was cancelled, because it was raining.

Alternatively you can place the word because before the first clause in a complex sentence.

Because it was raining, the football match was cancelled.

The Use of Subordinating Conjunctions

Here is a list of the most commonly used subordinating conjunctions:

As we progress more with sentence construction you'll understand why you need to be able to recognise both coordinating and subordinating conjunctions.

Quick Note: Certain words can be used as both subordinating conjunctions and prepositions depending on how they are applied.

A further really handy strategy for linking sentences is embedding.  It may be a process you're already using, if you take a closer look at your own writing you'll come across some embedded sentences.

We're going to take a look at how the process works.

Embedded sentences employ the use of relative pronouns, here are some of the more important ones: which, whose, who.

Suppose you wanted to join these two sentences together.

The crocodile pounced towards its prey.

Which had been lurking under the water.

In this example The crocodile pounced towards its prey, requiring something extra to give us a full picture of the information about the crocodile, that is where which had been lurking under the water is added in.

Correct: The crocodile, which had been lurking under the water, pounced towards its prey.

The sentence as a whole is easier to read because the commas set the embedded clause off from the main clause.

Up until now we've looked at different ways of joining sentences together.  Now we're going to take a look at various kinds of errors that can happen in the process of creating these joined sentences.

What are Runons and Comma Splices?

A run-on sentence is when two or more independent clauses are not joined correctly.  writing.umn.edu.

A comma splice occurs when two or more independent clauses are joined together only by a comma.

The flowers are beautiful they brighten the room.

The flowers are beautiful, they brighten the room.

Both of these sentences are incorrect.

Here are some examples of correct alternatives:

The simple answer to sentence runons and comma splices lie in other sentence combinations you have been looking at. 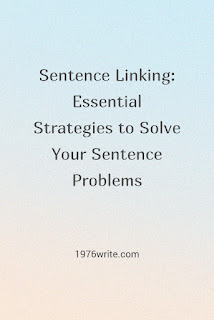 Sentence Linking and Dealing With the Problem of Sentence Fragments

What is a sentence fragment?

Groups of words that resemble a sentence are known as sentence fragments.  Sentence fragments usually start with a capital letter and have ending punctuation, although it's either an independent clause or a complete idea.

It contains all three things:

Sentence fragments may have one or two of these things, but will never contain all three.

Often sentences may lack a subject, have no verb, or are dependent clauses that can't stand alone.

Has no verb example:

How to Construct a Really Good Sentence
How to Improve Your Writing Vocabulary
Understanding Infinitives
A Sequence of Words: Constructing a Sentence
Posted by Helen Bolam at Monday, December 27, 2021
Email ThisBlogThis!Share to TwitterShare to FacebookShare to Pinterest
Labels: grammar and punctuation