The key to writing really well is to write great content, because 'Content is King'.
But that's easier said than done.

Are you a perfectionist who thinks that their writing just isn't hitting the mark? Or that one day you'll wake up and all of your writing ideas will disappear?

These are fears all writers have, and it doesn't matter what kind of writing you do, you still need to create great sentences to make great content.

Mastering the Art of Sentence Writing

You can't write a good book without writing really good sentences, and this goes for any blog or other publication you may be producing.

Your words are the building blocks to the message you want to share with your readers.  Being able to write really great sentences comes from what you learned at school, and the experience you pick up as you go along.  Some of the school stuff you may have forgotten about, but it's all just locked away in your memory banks ready to be drawn on.

Sentences: a Cohesive Bundle of Words that Make Sense

Good sentences should carry weight, and keep the reader's wanting more.
The Definition of a Sentence

Grammar, a grammatical unit of one or more words that expresses an independent statement, question, request, command, exclamation etc.

Usually sentences include the subject (person or thing being described) and a verb (action being done). This may also consist of a direct object (a secondary person or thing that the action is happening to).

To keep things simple we're going to describe a sentence as a group of words that have meaning.

A quick recap: Words that can be brought together and united to make sense, can tell a story or give useful information.

Don't get too tangled up in the grammar rules, think about what they do.

How to Write Great Sentences

If you want to write really well, learn from the master.


If you want to be a writer, you must do two things above all others: read a lot and write a lot - Stephen King

You need to start taking notes from the greats like Mark Twain, Jane Austen, Charles Dickens, T.S. Eliot. I think you get the picture.

Let's look at how you can get the attention of your readers and give them what they really want to read.


You can make anything by writing - C.S. Lewis

5 Tips Every Writer Should Know About Sentences

1. Use Words That Carry Clout

Really good sentences will awaken your emotions and pack a real emotional punch with every word.

You do this by falling into your emotions and let them do the typing, it'll feel like lightning hitting the page.

Here are some sentences that really make you stop and think:


Tears are words that need to be written - Paulo Coelho

If a nation loses its storytellers, it loses its childhood - Peter Handke

Let the world burn through you.  Throw the prism light, white hot, on paper - Ray Bradbury

If you can evoke a particular feeling in your reader then you can give them a real emotional jolt.

Don't go overboard with this particular sentence technique otherwise it'll look a little silly.  You need to season your writing lightly, by giving your post titles and subheadings a bit more flavour. 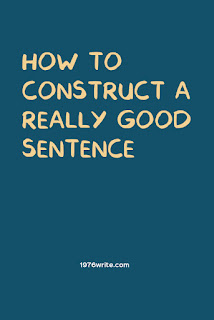 2. Use the Active Voice, and Give Your Sentences More Heart

Sentences should be written in the active voice, meaning the subject is doing something or has a relation to a direct or indirect object:

Example: The dark chocolate was eaten by Karen.

Technically the passive voice isn't wrong, it just doesn't do the job properly.

There may times when the passive voice is called for, just remember to use it very sparingly.

3. Use Description to Inspire the Senses

You can use rich and colourful descriptions to really lighten up a sentence.  This builds a picture in your reader's mind's eye.

You can be as specific as you want when it comes to description.  When describing a terrifying scene tell the reader about how bad your character is feeling and what he is seeing as the evening unfolds.
You need to conjure up a picture and release it on your reader.


The terror, which would not end for another twenty-eight years - if it ever did end - began, so far as I know or can tell, with a boat made from a sheet of newspaper floating down a gutter swollen in the rain.  - Stephen King's 'It'

Keep your sentences to no longer than 14 words maximum, a bit shorter than that is better, it makes them easier to read.