Even though punctuation can appear unimportant, it actually holds a greater role than you think in the grand scheme of  things.  A misplaced full stop, or comma can bring a totally different meaning to a sentence, and often leave people confused as to what was originally being communicated.

Starting with some of the most used punctuation marks in the English language, you'll understand how easy it is to misplace a punctuation mark, and change the sounding of a sentence.

Conveying the right punctuation can add emotion, and feeling, in fiction, giving your reader a sense of what the character is going through.  With a greater variety of punctuation you can bring mood, and effect that creates pace, and reflects your story.

Your use of punctuation must be constant throughout your writing giving your reader transparency and acknowledgement.
The Full Stop or Period (.)

Reminds you the sentence is complete.

The question mark has the power to change the meaning of a sentence by emerging at the close.

Example: Are you running today?

An exclamation point adds emotion to a sentence.

You can break sentences up into more sizable chunks, and insert pauses throughout with a comma.

Example: I need eggs, milk, flour, and butter for those pancakes on Tuesday.

Separate two independent clauses in a compound sentence, or items in a list where commas were previously used.

Example: There's a huge tarantula in the toilet; he has a lot of hair growing out of his legs. 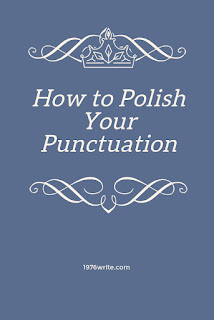 Used to present anything: words, lists, names or quotations.

Example: The hungry monster had one thing on his mind: peanut butter cupcakes.

Used to signify an incomplete sentence or missing text.

Used to indicate possession, and the plural form of letters and numbers.  Also used in contractions when letters are missing.

Example: That is Harriet's favourite blazer.

This particular set of punctuation marks can be used to create effects or draw particular attention to parts of your writing.  Some of them may look similar but behave very differently from one another.

Both the en dash and hyphen are often easily mistaken for each other, even though their appearance is very different.

A little wider than a hyphen and mostly used in writing and printing to demonstrate a range of connections and differentiations.

Usually used in place of a comma, parenthesis or colon, and twice as long.   It's used to emphasise the conclusion of a sentence.

Example: He gave his answer—No!

Used to join two or more words in a compound sentence.

Brackets are from a family of punctuation marks that are usually used in pairs.  Setting a portion of text from the rest of  the text.

Round Brackets () or Parentheses

Commonly used to include information or steer away from a point.

Example: The War Stories (the second book in the series) sold out within days of being launched at the bookstore.

Used as an indication to text that has been excluded, when being quoted directly from the source.

Example: She [Mrs Abingdon] was the last person at the scene of the crime.

Braces or curly brackets are mostly used in mathematics or to contain two or more lines of text or listed items.

Angle brackets can be used to signify internal thought.

Example: Colin handed me a flower. "Smell it."
I quickly inhaled . "It's nice."

Posted by Helen Bolam at Friday, August 17, 2018
Email ThisBlogThis!Share to TwitterShare to FacebookShare to Pinterest
Labels: grammar and punctuation