Everything You Need to Know About Sentences


How to Write a Sentence

All sentences contain one subject and one verb expressing a complete thought. Always start with a capital letter and end with punctuation which is either full-stop(.), a question mark (?), or an exclamation mark (!).
Often sentences have hidden subjects which is understood to be you. These are orders or commands telling the audience to do something i.e. (you) + do something.
There are complete sentences that do not follow the grammatical patterns or structures, but are considered complete sentences. These are understood when spoken or written. See examples below.
Four Types of Sentences

Sentences can be classified into four types: exclamatory, imperative, interrogative and declarative sentences.

An exclamatory sentence shows strong feeling or statement like surprise, anger or a greeting.
Imperative Sentences

These sentences are orders or commands, telling the readers to do something. Putting You into the sentence.

These sentences can be either positive or negative, and also called statements. These sentences inform or tell their audience something.
Interrogative Sentences

Interrogative sentences ask for information feedback from the audience, listeners or readers. 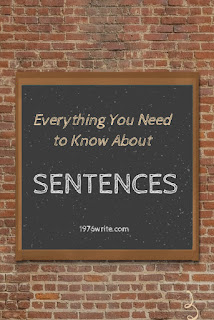 How Long Should a Sentence Be?

The length of your sentence should automatically be adapted to fit the subject you are describing.

Using a long description can add a sense of relaxation, and of time slowing down. Shorter sentences are quick and punchy, good for describing dramatic events and action.

Here are a few examples:

"The waves crashed. The moon shone brightly. All else was silent on the deserted beach. From the distance came the sound of thunder".

Once you start varying the length of your sentence you should also try varying their construction.

A simple technique is to put in the occasional adverb before the subject or verb.

Sentences where the subject is kept til the end are often called 'suspenseful', because the reader has to wait and see who or what the subject is. You can create effects by using these suspenseful sentences.

"Donna ran through the long crowded corridors, where her school mates stopped to stare at her, she ran out through the big double doors at the front of the school, and down the main road that led to her home".

This sentence can become more effective by putting the subject (Donna) and her verb (ran) at the end:

"Through the long-crowded corridors, where her schoolmates stopped to stare at her, out through the big double doors at the front of the school, and down the main road that led to her home, Donna ran".


The Five Elements of a Sentence

There are five elements to a sentence these help to form various types and structures of sentences which include adverbials, verbs, objects, complements and adverbials.

These can either perform an action or tell what the sentences are about. They can be either nouns, pronouns, noun phrases, noun clauses or a group of words functioning as a noun. These subjects can be identified as complete, simple, or compound subjects.

A complete subject includes the noun (simple subject) and it's modifiers. Its a noun clause or phrase.
Simple Subjects

The single noun or pronoun is the Simple Subject which performs the action or tells what the sentence is about.
Compound Subject

A Compound subject includes two or more nouns joined together by conjunction "and".
2. Verbs

Expressed actions or states of being are all verbs. You have action verbs or state verbs.
3. Objects

Indirect objects tell who the direct object is to or for, it's the recipient of the action.
Direct Objects

A Direct object receives the direct action from a verb.
Objects of Prepositions

The preposition and its object form the prepositional phrase which can be used as an adjective or adverb in a sentence.
4. Complements

Object complements can be either adjective or noun, they complete the meaning of an object.
5. Adverbials

Adverbs give more information about the verb.


Writing a complicated sentence can be difficult to some writers, and being able to write a rich and varied sentences is a skill in itself.  Being aware of simple, compound and complex sentences can help you vary the sentences in your own writing.

Simple sentences contain the most basic elements that make up a sentence: subject, verb and a completed thought.

By using complex sentences you can be more clear and specific about established relationships.

1. Avoid beginning a sentence with "and" or "but" or other coordinating conjunctions.  These words normally join parts of a sentence together, not begin a new sentence.

2. It is acceptable to start a sentence with "because" as long as the sentence is complete (such as "Because Helen and Kathryn arrived at the train station before noon, I did not see them at the station").

Subjects and Verbs What are They?

Verbs are action words such as eat, sleep, talk, walk, buy all verbs.
Subjects are the thing or person doing the action of the verb.

The Rules of Subject and Verb Agreement

The cat meows when she is angry.  The cats meow when they are angry.

2. The words that come between the subject and verb do not affect agreement.

The cat, who is chewing on my slipper, is usually very good.

The colours of the rainbow are beautiful.

4. Sentences starting with "there" or "here", the subject will always be placed after the verb, care needs to be taken to identify it correctly.

There is a problem with the spreadsheet. Here are the papers you requested.

5. In questions, subjects don't always come before verbs.  Make sure you identify the subject before deciding on the proper verb form to use.

Where are the pieces of the jigsaw?

6.  A plural verb is required if two subjects are joined by "and".

The  cow and pig are jumping over the moon.

7. If two subjects are separated by "and" and refer to the same person, the verb is singular.

Black beans and rice is my mom's favourite dish.

No drinking or smoking allowed.  Every man and woman is required to check in.

9.  When the subjects are both singular and are connected by the words "or," "nor," "neither/nor," "either/or," and "not only/but also" the verb is singular.

Mary or Harry is to blame for the accident.

10. Objects and prepositions only factor into the decision of plural or singular verbs forms is when noun and pronoun subjects like "some," "half," "none," "more," or "all" are followed by a prepositional phrase.  The object of the preposition determines the form of the verb.

11.  A singular verb is usually used for units of measurement or time.

Three quarts of oil was required to get the car started.

12.  If both subjects are plural and are connected by the words "or," "nor," "neither/nor," and "not only/but also" the verb is plural.

Cats and dogs are available at the pound.

13.  If the words "or," "nor," "neither/nor," "either/or." and "not only/but also" are connected to one singular subject and one plural, you use the verb form of the subject that is the nearest verb.

Few were left alive after the crash.

16.  Two infinitives separated by "and" they take the plural form of the verb.

To walk and to chew gum requires great skill.

17.  If gerunds are used as the subject of a sentence, they take the singular form of the verb, except when they are linked by "and," they take the plural form.

Standing in the mud was a bad idea.  Swimming in the sea and playing the flute are my hobbies.

The herd is stampeding.

19.  The titles of books, movies and novels, etc. are treated as singular and take a singular verb.

20.  Final Rule - Always remember, only the subject affects the verb!

Useful Things to Know About Paragraphs

Why Paragraphs are Shorter Today

The Long and Short of It

Blogging has brought in the short pithy paragraph, which is great for the eyes of online readers.

Due to the fact the average person has a rapidly declining attention span. People find too many sentences a problem when linked together in one paragraph.

If writing long paragraphs is a good idea, think again. People prefer short and to the point.

It wasn't that long ago you could write a paragraph, and have it occupy the whole page.

This was defined in educational and academic writing, with paragraphs having between 3 to 8 sentences, consisting of 100-250 words.

But there's no doubt about it, short paragraphs are here to stay, for the simple reason they're much easier to read.

E-readers, and online readers love a bit of white space to scroll up and down the document. All of that work put into writing sentences without lines and breaks, goes to waste on an e-reader or tablet. So keep your readers happy with short pithy sentences.

Fortunately people still love reading long paragraphs on the printed page. But this is still different for the kindle or e-reader. You should take more care to write for the small screen, than the page, in an e-reader.

Short single sentences have become normal practice for most bloggers, this even goes for larger publications online such as magazines and newspapers.

Take time and check over your current blog format. Do you need to write in a simpler fashion, or is that your writing style anyway?

Don't bore your readers with longwinded paragraphs, get straight to the point with amazing headlines. Add in keywords for SEO value, and you have the format for a great blog post!

This blog contains affiliate links to Amazon and ShareASale, this means that if you purchase through these links you are supporting 1976write and we thank you for that.

As Featured on Fotor Blog 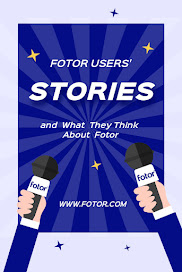