A Sequence of Words: Constructing a Sentence

Most people know a sentence when they see one.  Look at these sentences and underline the one you think is a proper sentence:

1. When see a they stop a cars flag red.

2. Flag they see a red all cars when stop.

3. Stop all cars when they see red a flag.

4. All cars stop when they see a red flag.

The above sentences contain the same amount of words, but only one of them makes real sense.  Sentence 4 is the real sentence, and having the ability to identify the natural flow of a sentence lies in your own knowledge and instinctive language skill.

Sentences With One Clause

Simply put, a clause, a subject, plus a predicate.  Which means:

The subject of a clause can name something such as an object, person, place or idea.  The subject in the sentence is normally made up of nouns and pronouns, or a noun substitute.

The best way to deconstruct a clause is to focus on the predicate, and the main part of the predicate is the verb.

Verbs are usually in the form of some kind of action, and this can be a visible action like he rides, or she kissed.  Or invisible actions like she forgot, and we determined.

If we go back to our original sentence, draw a line under the visible action or verb.

All cars stop when they see a red flag.

If you've recognised 'stop' as being the visible action then you'd be correct, the subject is stopping

In sentences you have other words that don't show an action, but instead link a sentence together.  Linking verbs will show the subject to be in a certain state of being, this is done by linking a subject to a word in the predicate.

He is a monster.

In both sentences the subject is not performing any kind of action, but they are in a state of being.

Linking verbs come in many different tenses such as:

The verb to be:

The Part of Context in a Sentence

Verbs can be action or linking verbs depending on the context they're in.

I smelled the friendly fragrance of flowers in the living room.

The verb smelled is identifying an action of the subject (flowers) which is smelled.  Let's take a look at the same verb which has a different meaning in the sentence below.

Let's go back to our original sentence:

All cars stop when they see a red flag.

Remember: A key word is what the predicate makes a statement about.  Within the present tense, it's the simple subject with which the verb must comply.

Spotting Elements that Complete the Verb

Verbs can't stand alone with just a subject.  Take a look at these subject and verb combinations:

In all cases the sentence needs more words to create a meaning.  In the predicate of a clause, words that are complements and objects fill in the gaps.

Let's take a look at their basic types.

A subject complement usually comes in the form of a noun, pronoun, adverb or adjective, and will follow a linking verb.

Take a look at these underlined subject complements:

The subject complement is maths teacher.

The subject complement is amazing.

Alongside linking verbs are transitive verbs that also need completion.  A transitive verb transfers action from the subject before the verb, then to the object after the verb.

Direct objects are words used to complete the meaning of transitive verbs.  You'll find them following action verbs and answering questions like 'Whom?', or 'What?'.

You is the direct object of the verb like.

The doctor wrote the prescription.

The direct object answers the question, "The doctor wrote what?".

The doctor wrote the prescription.

The prescription was written by the doctor.

If a linking verb and subject complement are used then you won't be able to convert it from an active into a passive, because this transformation only works with sentences containing direct objects.

Indirect Objects, on occasion the predicate of a clause, may also contain a word that is indirectly affected by the verb, and it usually comes before the direct object.  To whom or for whom an action is done is the job of the indirect object.

Frankie sent what? The bag?.  For whom? For Edward.

Verbs commonly followed by indirect and direct objects can be found in the form of bring, send, sell, offer, lend, give, buy.

You can find object complements in clauses with a verb like elect, appoint, choose, consider, make, name, or think.  All of these words mean the same thing to make or consider.

Harry called his mother a saint.

The above sentence is very much like 'Harry considered his mother a saint.'

A Closer Inspection of  Subjects

Let's examine more closely what the subject of the clause does within a sentence.  Key words or simple subjects are usually pronouns, nouns, or noun substitutes.  A single noun, a single pronoun , or both combined might be a key word.

Nouns are usually people, places, things, or ideas, which means the word thing is a more solid noun, something you can touch or experience.  Idea is an abstract noun, which makes it intangible.

Nouns are organised in their own groups:

The above listed nouns, except those in capitals, can go after the words a, an or the.  Since they 'mark' the appearance of a noun.

But it doesn't work if you said 'a beautiful' or 'the scary', it's incomplete because they're both adjectives, and not nouns.

You can check to see if a word is a noun by using it as the subject of the sentence.  If it does then the word is either a noun or pronoun.

You can test this by testing it out:

The light lit up the room.

The decorate lit up the room.

In this quick check we can see that light is a noun and decorate is not.

A pronoun is a word that replaces a noun.

Give a girl the right shoes, and she can conquer the world.

Instead of saying the noun phrase 'a girl' again 'she' replaces it.

Pronouns have other jobs in sentences.  Let's take a look at three groups of pronouns that can be used as subjects independent of clauses.

Important note: Pronouns can be the subjects of sentences.

There are many other constructions, alongside nouns and pronouns, that can  work as subjects.  Things like, words, phrases, or clauses that can perform the same job.

Let's take a look at the main types of noun substitutes.

Common constructions such as verb phrases, gerund phrases, and prepositional phrases are all common formations that can do the same job as a noun.  Which means they can be the subjects of clauses, and also the objects of verbs.

What really bothers me is mouldy cheese on an expensive cheese board.

Do you see how similar the subject in this sentence is to the noun or phrase My complaint?

Before dinner is a good time for a walk.

Under the bridge was a good place to be.

Gerunds are words ending in -ing and works as a noun.  Gerund phrase is a gerund plus other words attached to it.

Infinitive word phrases are usually preceded by the word to.

Let's look at this sentence:

To decide is to take a risk.

In this sentence the verb phrase acts like a noun, and is just like the subject of the sentence.

You can write something similar by using a conventional noun as the subject of the sentence:

A decision is always a risk.

A Closer Inspection of Predicates

The predicate is the part of the sentence that tells what the subject does or is.

Something else to think about is that verbs change in form to communicate changes in time, these are called verb tenses. Often forming a verb tense will include nothing more than the addition of an ending.  This can be done by adding -d, or -ed, forming the past tense of a regular verb.  On other occasions it means adding a helping verb which is a verb that helps another verb form a particular tense or mood.

Also can include forms of the word to have:

Then there are other helping verbs called modal auxiliaries:

Helping verbs that give extra importance to the predicate:

The moment a verb joins up with a helping verb it creates a verb phrase.

There are verb phrases with more than one helper: 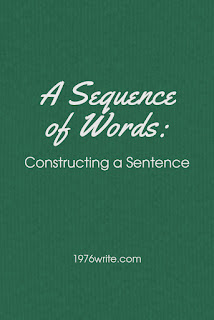 We're going to move our attention to the core of a sentence, the parts that would modify or describe.  These words are normally quite elaborate, but still form an essential part of the clause.  They also help to flesh out the sentence.  Often these modifiers are themselves part of the core and serve as completing elements after verbs.

Let's take a look at four different types of modifiers.

Words used to describe nouns and pronouns are adjectives, and they usually precede the words they describe.

This is a fractious team.

She has a marvellous attitude.

It is a striking sculpture.

Adjectives can also come behind words they describe if they are used as complements.

This team is fractious.

Her attitude is marvellous.

The sculpture is striking.

Adverbs don't have to end in -ly, some do but it's not always the case, they can also describe other modifiers, which are adjectives and adverbs.  We're going to look at the basic sentence construction, and how adverbs modify verbs.

He went to London yesterday.

The fog swirled around everywhere.

The children sucked their thumbs loudly.

Some actions tell how an action is done, or an action happens.

Appositives are noun phrases that follow and describe other nouns, and are known as another kind of modifier.  They can sometimes appear after any noun, but we're going to look at how often they follow the simple subject of a clause.  They're usually offset with commas.

Dexter, my dog, will chew your shoes if you leave them there.

Lee, my Army mate, caught a whelk while fishing for bass.

Dr. Pat, the creator of the turnip brew, sold 10 barrels on the first day.

You can observe how each appositive is a noun phrase that follows and describes another noun.

Prepositional phrases are a group of words that consist of a preposition, the object of the proposition and any modifiers.

The prepositional phrase is bold, and the phrase is underlined.

A singer with passion.

A town near London.

Words that are thought of as direction or relationship words are prepositions.  Nouns and pronouns that follow a preposition are usually called the object of the preposition.

into the grocery store

What You Need to Know About Grammar

Posted by Helen Bolam at Monday, December 13, 2021
Email ThisBlogThis!Share to TwitterShare to FacebookShare to Pinterest
Labels: grammar and punctuation