Remarkable Jobs of Literary Greats, Before They Were Famous

Many successful writers started out in strange and sometimes even degrading work.  While most people would be sapped of all inspiration, many great authors and poets were stimulated enough to write some of their greatest work.

Here are 10 remarkable jobs of the literary greats:

Acclaimed author found inspiration for Carrie while he was working as a high school janitor.  King originally threw away his first draft of the story but fortunately wife Tabitha wanted him to continue writing the story because she wanted to know how it ended.

The Handmaid's Tale  author Margaret Attwood started out as a cash register clark, handling both the register and her ill-mannered boyfriend who would visit her just for a look.
3. Harper Lee

Harper Lee started out as an airline reservations clark, before her friends supported her financially, so she could write full-time.

Steinbeck had many odd and strange jobs before becoming a full-time writer: fruit picker, apprentice painter, estate caretaker, and a construction worker at Madison Square Garden.

Many writer's take on work just to make ends meet, and Adams was no exception.  While working as a bodyguard for a wealthy Arabian family, he also wrote for radio shows and Monty Python.

When his short stories weren't being picked up for publication, Gaiman became a freelance journalist, learning about the publishing world from the inside.

Agatha Christie had a vast knowledge of poisons, which isn't surprising when you discover she was an assistant apothecary.

Before The Catcher in the Rye, J.D. Salinger worked as an entertainment director on the H.M.S. Kungsholm, a Swedish luxury liner.  He was writing and publishing short stories during this time. 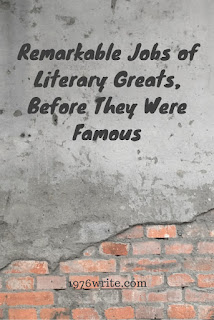 Author of One Flew Over the Cuckoo's Nest Ken Kesey, got his inspiration for the book while working as a janitor in a mental hospital.  Along with his experience participating in the CIA study MKULTRA programme while a student at Stanford University.

London would steal and resell oysters from the West Coast, because they were in such high demand.  The term "oyster pirate" was mentioned numerous times throughout his work.
Read more:
The 10 Top Creativelive Courses for Writers

How to Writer Powerful Headlines

6 Reasons Why "Just Write" is the Best Advice for Writers