Diction is the verbal choice a writer makes to communicate their own particular story or point of view.  The words selected, along with their arrangement in a paragraph or sentence all make up the distinct style of the author.  The words you choose determine the diction you're using.

There are seven types of diction:

Formal - text that demonstrates a professional tone is usually used in business or essay writing.

Hello, young lady.  It is a pleasure to make your acquaintance.  How are you today?

Would you like to explain the reason behind your decision to leave the party early?

Why'd you leave the party so soon?

Colloquial - text that is associated with a specific region or time period.  Mostly used in portraying a more realistic story.

Stir up a hornet's nest.

My neighbour is wicked smart!

Slang - text that originates within a particular subgroup or culture, which may become widespread in use.

Kerry asked Natalie if she enjoyed visiting the museum, expecting a yes or no answer.  Instead Kerry droned on and on, describing every exhibit she saw in order providing a detailed history of each item.  It took longer than visiting the museum in person!

In Love's Labour Lost, Shakespeare labels one of his characters as a pendant.  This is because Holofernes, the Pendant, is precise in his descriptions, using unnecessary words to describe the same thing.  Making this particular character sound obnoxious, and to be made fun of or laughed at.

Abstract - text that uses expression which includes ideas and emotions.

Even a large male gorilla, unaccustomed to tourists, is frightened by people.

put it shining anywhere I please.
By walking slowly on some evening later,
I've pulled it from the crate of crooked trees,
And brought it over glossy water, greater,
And dropped it in, and seen the image wallow,
The colour run, all sorts of wonder follow.

The Freedom of the Moon.  Robert Frost.

Concrete - text that is denotative of meanings.  Usually more specific, detailed and literal and not open to interpretation.

A four-hundred pound male (gorilla), unaccustomed to tourists, will bolt into the forest, trailing a stream of diarrohea, at the mere sight of a person.

I brought my child a phone.

My dog jumped over the fence after seeing a thief. 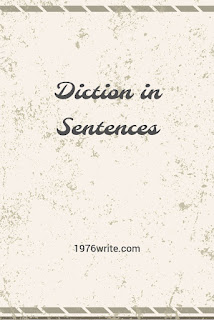 Poetic - text that is lyrical.  Includes descriptive language and is set to a rhythm.

These beauteous forms,
Through a long absence, have not been to me
As is a landscape to a blind man's eye:
But oft, in lonely rooms, and 'mid the din
Of towns and cities, I have owed to them,
In hours of weariness, sensations sweet,
Felt in the blood, and felt along the heart;

How Words Enrich Our Lives
How to Construct a Really Good Sentence
How to Improve Your Writing Vocabulary
Understanding Infinitives
A Sequence of Words: Constructing a Sentence