The English language is comprised of eight different parts.  These parts include pronouns, prepositions, adjectives, and adverbs.  When joined together will make sentences both grammatically correct and readable.

Pronouns are words that substitute nouns in a sentence, and are often used to avoid repetition of the same noun repeatedly.

Common pronouns are made up of I, me, mine, she, he, it, we, and us.  There are a myriad of different types of pronouns, each with its own purpose.
Personal Pronouns

Personal pronouns are usually used to substitute a person's name, and are either found to be subjective or objective pronouns.  Which means they either operate as the subject or object of a sentence. 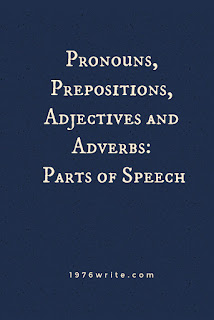 As the name suggests indefinite pronouns don't pinpoint any particular nouns.  They're used when an object doesn't need to be specifically identified.  These include:
Sentence examples:
Relative Pronouns

Relative pronouns connect a clause of phrase to a noun or pronoun.  Usually used when we need to add more information.  They are:
Sentence examples:
Intensive Pronouns

Intensive pronouns are usually used to intensify, or emphasise, pronouns or nouns.  They can be found after the noun they're intensifying.  Usually ending in -self or -selves.  They are:
Sentence examples:
Demonstrative Pronouns

Demonstrative pronouns generally take the place of a noun that's already been quoted.  They can be plural or singular, and there are five of them.  They include:
Sentence examples:
Interrogative Pronouns

Interrogative pronouns, do what they say, they pose a question.  They are:
Sentence examples:
Reflexive Pronouns

Similar to intensive pronouns, reflexive pronouns are essential to a sentence's meaning, unlike intensive pronouns that aren't.  They're also used when the subject and the object of a sentence refers to the same person or thing.  These particular pronouns end in -self or -selves.  They are:
Sentence examples:
Prepositions

Words like at, for, in, off, on, over and under are all simple prepositions.  These commonly used prepositions can be used to describe a location, time or place.

Double prepositions are commonly two simple prepositions used together, generally indicating direction.  Some simple examples of these are into, upon, onto, out of, from within.
Compound Prepositions

Compound prepositions comprise of two or more words, normally a simple preposition and another word, to convey location.  Simple examples are in addition to, on behalf of, and in the middle of.
Participle Prepositions

Participle prepositions usually end in -ed and -ing.  Some examples are words like considering, during, concerning, provided Phrase Prepositions

Phrase prepositions usually include, an object, and the object's modifier.  Simple examples are phrases like on time, at home, before class. and on the floor.
Adjectives

Adjectives are words that describe nouns, by using each of these questions:  Which one is it? How many are there? What kind is it?  Adjectives are usually a single word, clause or phrase.

Take a look at these examples:

Carl decided that the fuzzy green bread would make an unappetising sandwich.

A friend with a fat wallet will never want for a weekend shopping partner.

What kind of friend? One with money to spend!

A sock that is still warm from the dryer is more comforting than a hot chocolate.

What kind of sock? One right out of the dryer!

How many hungry space aliens? Eight!

How many students? Thirteen!

The disorganised pile of books, which contained eighteen overdue volumes from the library and six unread class texts, blocked the doorway in Sarah's room.

How many books? Twenty-four!

Which One is It?

The unhealthiest item from the cafeteria is the ham sub, which will slime your hands with grease.

Which item from the cafeteria? Certainly not the one that will help lower your cholesterol!

The fly eyeing your cake has started to fly this way.

Which fly? Not the one flying towards you who wants your cake!

The students who neglected to prepare for Mrs. White's English class hide in the cafeteria rather than risk their teacher's wrath.

Which students? Not the good students but the lazy skivers.

Learn How to Punctuate a Series of Adjectives

Describing a noun fully may require two or more adjectives.  Occasionally a series of adjectives requires commas, but this isn't always the case.  What makes the difference?

You can test coordinate adjectives with these two tests.  When you (1) reorder the series or (2) insert and between them, they still make sense.

The tall, creamy, delicious milkshake melted on the counter while the preoccupied waiter flirted with the pretty cashier.

The delicious, tall, creamy milkshake melted on the counter while the preoccupied waiter flirted with the pretty cashier.

All of the adjectives make sense, even though the order was changed.

Even when and is inserted between the adjectives, you still have a clear sentence:

The tall and creamy and delicious milkshake melted on the counter while the preoccupied waiter flirted with the pretty cashier.

Non coordinate adjectives make no sense when you add or insert and between them.

When the order is switched, the sentence becomes incomprehensible.

Things will become even more incomprehensible when you switch the order of the adjectives.

Logic will evaporate when you insert and between the adjectives.

Jeanne's and two and fat and Burmese cats hog the electric blanket on cold winter evenings.

How to Form Comparative and Superlative Adjectives Correctly

Nicola, a suck up who sits in the front row, has a thicker notebook than Carol, who never comes to class.

The thinnest notebook belongs to Steve, a computer geek who scans all notes and handouts and saves them on the hard drive of his PC.

Comparative adjectives can be formed in two ways.  Er can be added to the end of the adjective, or you can use more or less before it.  However, do not, do both!  The rules of grammar will be violated if you claim that you are more taller, more smarter, or less faster than your older sister Carol.

One-syllable adjectives generally take er at the end, for example:

Because Chester is a smaller cat than Chevron, he loses the fights for tuna fish.

For lunch, we ordered a bigger pizza than usual so that we would have cold leftovers for dinner.

Lucy is lazier than an old dog; he is perfectly happy spending an entire Saturday on the couch watching old movies and napping.

Use more or less before adjectives with three or more syllables:

Films on our new flat-screen television are, thankfully, less colourful; we no longer have to stomach the electric greens and nuclear pinks of the old unit.

Linda is more understanding than anyone I know; she watches where she steps to avoid squashing a poor bug by accident.

Superlative adjectives can be formed in two ways as well.  By adding est to the end of the adjective, or you can use most or least before it.  However, do not, do both!  Another grammatical rule will be violated if you claim that you are the most brightest, most happiest, or least angriest member of your family.

These are the bitterest lemon-roasted squid tentacles that I have ever eaten!

Scott, the tallest member of the class, must sit in the front row because he has bad eyes; the rest of us crane around him for a glimpse of the board.

Because John refuses to read directions, he made the crunchiest mashed potatoes ever in the history of instant food.

Because David has a crush on Ms. White, his English teacher, he believes that she is the most beautiful creature to walk the planet.

Most or least can be used before adjectives with three or more syllables:

The most annoying experience of Helena's day was arriving home to discover that the onion rings were missing from her drive-thru order.

The least believable detail of the story was that the space aliens had offered Eli a slice cheese and ham pizza before his release.

Adverbs modify the meaning of verbs, adjectives, other adverbs and clauses.

Our Labrador Goldie sleeps on the living room floor.

Is Goldie a sound sleeper, curled into a tight ball?  Or is he a sporadic sleeper, his paws twitching while he dreams? The addition of an adverb alters the meaning of the verb sleeps so that the reader has a clearer picture.

Our Labrador Goldie sleeps quietly on the living room floor.

Adverbs can be single words, or they can be clauses or phrases.  Adverbs respond to one of these four questions: How? When? Where? and Why?

The adverb unusually modifies the entire main clause that follows.

There are many single-word adverbs that end in ly.  From the examples above you saw quietly, rudely, completely, happily, and unusually.

Other adverbs ending in ly such as, lively, lonely, and lovely are adjectives and answer these questions, What kind? or Which one?

A lot of single-word adverbs have no specific ending, such as next, not, often, seldom, and then.  If you're not sure if a word is an adverb or not, use a dictionary to decide its part of speech.

Adverbs can also be multi-word phrases and clauses.

At 3 a.m., a bird flew through Lucy's open bedroom window.

With a fork, Henry beat the raw eggs until they foamed.

The subordinate clause until they foamed describes how Henry prepared the eggs.

Carol emptied the carton of milk into the sink because the expiration date had long passed.

The subordinate clause because the expiration date had long passed describes why Carol poured out the milk.

Steer Clear of an Adverb When a Single, Stronger Word Will Do

Many bibliophiles think that adverbs make sentences bloated and flabby.  Use a powerful single word, instead of a two-word combination, it will give your sentence more punch!

Among the members of her family, Debra eats cheese and tomato pizza the least often.

Adjectives Shouldn't Be Used When an Adverb is Required

People will often say, "Tony is really smart" or "This fish sauce is really salty."

Adjectives such as smart or salty, cannot be modified by another adjective like real.

Train yourself to add the extra ly syllable when you speak, this way you'll remember when you write, at a time when its absence will likely cost you respect!

Recognise That an Adverb is not Part of the Verb

Certain verbs require up to four words to complete the tense.  Multi-part verbs have a base or main part as well as auxiliary or helping verb with it.

When a short adverb such as also, never, or not intrudes, it is still an adverb, not part of the verb.

For her birthday, Eleanor would also like a jar of dill pickles.

After that dreadful stew you made last night, Sarah will never eat carrots or mince again.

Despite the imminent deadline, Carol-Ann has not started her research thesis.

Has started = verb; not = adverb
Read more:
Why is Grammar So Important