In English grammar capitalisation is used at the head of a word, with the first letter in uppercase and the remaining in lowercase.

Capitalisation for professional and academic writers is a bit more complicated than just writing names and titles with capital letters.

Always capitalise the first word in a sentence and after a period.

Proper nouns and adjectives that have been created from proper nouns should be capitalised.

Examples:
Over time many proper nouns no longer need capitalisation, and have a life of their own.

Examples:
The role of captialisation is to bring to attention component within a particular group or people, place or things.  We can talk about a mountain in a particular country or we could be more precise and say Mount Everest which sets it apart from every other mountain earth.
Handy Capitalisation Reference List:

Months of the year and days of the week

Authority and Government matters:
Episodes and eras in history:
Holidays

This list is of categories not capitalised unless the word contains a proper noun or proper adjective (maybe a trademark).  n these cases only the proper nouns or adjectives are capitalised.

When do you stop adding capitals to words?  There is no logical explanation or formula to follow.  Use books and search engines as your reference guide.  Don't always expect big companies and corporations to use uppercase in their company names and products.  Many writers would still start with a capital even if the company name is eBay or iPhone.

Titles should only be capitalised before names, unless they are followed by a comma.  Don't capitalise the title when it's used after or instead of a name.

Occupations aren't the same as titles.  Occupations shouldn't be capitalised before full names.

Example:
Familiar names are not capitalised with pronouns or nouns, when they follow a personal name or when referencing a specific person.

Example:
c. Nicknames are capitalised in all cases.

All geographical regions should be capitalised, but not points of the compass.

Example:
Other areas have been capitalised because they are so well known to people.

Don't capitalise the word 'the' before a proper noun.

I'm reading the Daily Mirror.
They're fans of the Ramones.

When using a quotation at the beginning or middle of a sentence, always capitalise it.

Some writers like to capitalise a mid-sentence independent clause or question.

All art movements should be capitalised.

Book titles, films, plays, songs, essays, and chapters can be really annoying, especially when there are various policies to follow.

Here are some universal rules to follow for composition titles:
Rules for Writing Numbers

Writing out numerals or numbers is down to the writer' preference.  If you decide to use a particular style of writing numbers, always make it consistent throughout your work.

A convoluted topic, often with many exceptions, with no consistency found in books, newspapers, magazines or blogs.

Here are 12 rules to think about when you write out numbers:

All numbers should be spelt out at the beginning of a sentence.

a. All compound numbers should be hyphenated.

b. All written-out fractions should be hyphenated.

a. When using four or more digits, use commas.   Place the first comma three spaces to the left.  Then continue placing commas after every three digits.

Important note: Don't include decimal points when doing the counting.

Example:
b. Points, pounds or dollar signs aren't required when writing out sums of less than a pound or dollar.
Rule 4

b. Most people use numbers for the time of day.

Example:
Many writers still prefer to write out the time, especially when they're using o'clock.

Unless used at the beginning of a sentence, mixed fractions are usually expressed in numbers. 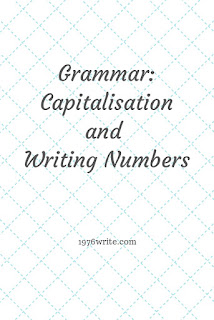 Example:
Be consistent with large round numbers in a sentence.

Always use numbers when writing out decimals, this is easier for the reader to understand.

Numbers with three or more digits, the word isn't necessary.  The word 'and' can be used to express a decimal point that accompanies any numbers.

The examples below are more commonly used when using figures to express dates.

It's not necessary to capitalise decades.

Example:
Often writers place the apostrophe after the number:
Rule 12

You can also write decades in complete numerals, without the 's' after the year.