Why It's the Best Time Ever to be a Writer

Since the inception of the Internet, opportunities have emerged that were never dreamed of before.  You could liken this to the invention of the printing press, by Johannes Gutenberg in 1450.  People started building their own printing presses, creating work for writers everywhere.  All of these presses required books and printing materials.  Giving more people new opportunities to move up in the world.

Several centuries later in the 1700s newspapers were the big businesses of the day due to new developments of the time.  This followed with a demand for editors and journalists, not to mention copywriters to create the ads, which brought in extra revenue for these big businesses.

Companies such as Sears benefited hugely from these further advances at the end of the 19th century.  Copywriters and editors were needed to write pages and pages of copy for their catalogues.

By the 20th century radio produced a new kind of writer, so the hunt was on for new talent to write and produce their TV shows, and write their scripts.  Included in each TV show segment was a 6-7 minute break for commercials, and more writers were needed to create material for these commercials.

When the Internet was in its infancy the need increased again.  What started as 100 websites in 1992, grew to 232 million by 2013.  Who knows how many there are today.

Believe it or not, someone has to write those webpages.  If it's not the blog or website owner, then the job is outsourced to a freelancer.  Many of these big corporations use the same writer's regularly to write for their websites and businesses.  And that doesn't include the huge amount of emails or printed content that goes along with that.  Let's take a quick look at the fortune 500 companies, who require hundreds of thousands of new emails to be written each year.  This could be about 50 million emails a year from 500 companies.

One thing's for sure, fresh content requires a creative process that even the best computer in the world would struggle with.

Discover below some important points to help you understand what you need to know about making money from your writing.

1. Visualise Yourself as an Entrepreneur

The term entrepreneur is scary and sounds very business-like for those writers who want to create art.  But as writer's we use our art and turn it into something to be valued, such as, print books, audio books, e-books, scripts, the list goes on.  That may mean that you bring value to your audience through the form of information, inspiration or entertainment, and for you the creator, an income.

Once you understand why you're also an entrepreneur, as well as a writer you'll find it easier to know why you need to learn new skills, and challenges in order to thrive.

2. Concentrate on Building a Malleable Income

A normal nine to five job requires you work for a certain number of hours and receive pay for the work you've done.  If those hours aren't met, that simply means your contract has been broken, and you'll more than likely get the sack.  This is because your work is not scalable, and you can't get that time back.

With an income that's malleable you're in the driving seat, and in charge of the hours you work to produce something, but have the ability to sell that product over and over again.

A good example of  this is if you spend your evenings working on a book that'll you'll eventually publish as a paperback or e-book.  That book could sell anything from one to ten thousand copies.  Which means it can be an income for the author seventy years after the author dies, the current copyright period.  This means that by writing one book, you could have a continuous income stream for many years to come.

If you put the time in, your intellectual property assets will soon start to soar, and will make you a tidy sum regularly.  What starts as a drip every once in a while soon becomes a stream, and then a river, the more you add to your body of work.

Rather than having multiple income streams, start thinking about investing your time in creating scalable assets.

I know for many people this is difficult because most people have full-time jobs and families to look after.  Making any spare time precious, but if you really want to change your way of life for the better it might be something to consider.

3. Have More than One Income Stream

It's pretty fair to say that in the 21st century that very few, if any jobs are for life anymore.  Add to that the ever changing financial markets, what you're left with is a lot of uncertainty and instability.  This is the same with your writing.  Never put all your eggs in one basket.  Spread things out a bit, have more than one product, book, or affiliate income stream, because you're more than likely to fall into difficulty at some point.  And having a backup gives you peace of mind.

When people think of author's they imagine books in stores, but in the Internet age you can reach far more readers with online book stores such as Amazon.  Technology today helps authors sell their books to people in countries all over the world.

Writing today is about expanding your horizons, because the money you earn will come from the worldwide market, and not just your local bookstore. 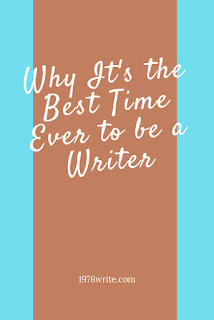 5. Choose Your Meaning of Success

Everyone's situation is different, and so will your definition of success, and how that meets your monthly and yearly outgoings.

Here are somethings to think about:
These points are all important because you need to know what your meaning of success is, and know when you get there.

How you publish, what you write, and how you market your books and writing will all be decided in what you want from your writing career.

What the Differences are on the Author Success Scale

At the other end of the scale are the Pulitzer or Booker Prize winners whose goal is critical acclaim.  A Pulitzer Prize winner might only receive fifteen thousand dollars, but compared to J.K. Rowling's income it's chump change.

These are two very different successes you need to think about.  Are you looking for commercial success or critical acclaim? Or do you just want people to value your books enough to buy them?  To be that successful is a pretty tall order to ask of anybody.  When you consider most writer's will fight hard to just make an income.

At the end of the day you need to think about what is most important to you and how you measure your own success.
Read more:
10 Steps to Make Money With Amazon AssociatesSelf-Publishing an Ebook, What You Need to Know

Why You Should Think About Being an Indie Author

Know Your Income Options After You've Published a Book
Share this post with your friends!
Posted by Helen Bolam at Monday, March 23, 2020