A traditional publishing deal is a dream of most writers, and a reality many crave because of the success that usually comes with a traditional publishing deal.
But things have changed in the era of the Internet, and traditional book publishing has recently lost its lustre,  according to an article in 2018 by The Guardian, it clearly states that traditionally published authors' earnings fell below the minimum wage and started at around £10,500.  With most books only selling about 500 copies, this is not a viable income for any writer to live on.  Let's not forget the cream of authors, or the top 1%, I don't need to mention any names, who are making six figures easily, but on the whole most aren't earning anywhere that amount of money through their books.

So let's take a deeper look into the world of traditional publishing.

A reference to the traditional system of getting your book published and putting it into print for people to read.  Leading to submissions to agents, receiving thousands of rejections, then eventually being accepted, and then a book deal.  A publisher will then see numerous manuscripts that will be rejected, before finally deciding on a one they like, then a contract is signed.  This is finished off by innumerable edits and finally published.
The Benefits of Traditional Publishing
Cachet and Approval

The end game for most authors is the approval of a publishing house that wants to publish your work.  Even if things don't work out the way you wanted them to, your meaning of success was successfully followed by a traditional book deal.

As part of your book contract you'll have cover designers, editors, and maybe even marketers at your fingertips.  The level of marketing usually conveys how much has been invested in your book, and goes to booksellers not consumers.  At the very least you'll have a sales team to set up your books at the bookstore.  The thought of handling marketing is the last thing on most writer's minds, but in the digital age it's something they'll have to get used to.

Financial Costs are covered, and royalties are given in advance

Traditional publishing is a paid for affair, and you should never be asked for money from a traditional publishing deal.  The likelihood is that of a vanity publisher.  The average book publishing deal is around £6,000, or higher royalties with a smaller advance.  Bear in mind the advance is usually against royalties which are usually 7-25% of the net book price.  Consequently if your book makes more than £15,000, you have to earn more in sales before you receive any money.
Paperback distribution is a breeze

Traditional publishing comes into its own when it comes to distributing books, because that is what the model was originally designed for.  Book buyers choose books from sales reps, paying later on an invoice, less any returns.  All books are given a month to sell then taken off the shelves, unless they are continuous sellers.

Critical acclaim and book prizes are more likely with traditional publishing, but indie authors aren't accessible to many literary prizes

The book industry is going through many changes, and this includes the prizes handed out to worthy authors.  Campaigns such as the Alliance of Independent Authors are also open to indie authors.

The possibility of becoming a brand name author

There are only a handful of writers that we know who are household names: Dan Brown, J.K.Rowling, Stephen King, to name a few.  The A-list writers follow below them, many of whom you'll recognise, John Grisham, James Patterson, Lee Child, who are staples of traditional publishing, and who wouldn't go anywhere else.  For us mere mortals it would be like winning the lottery, but not impossible.  If you want to go down that route, the odds are not in your favour, especially in the current climate of fractured media space.
The Downside of Traditional Publishing
You need to be in it for the long haul

The process of writing and editing your manuscript doesn't change, but the time it takes you to get an agent, a publishing deal, and your book to be launched, could go into years of waiting.  In the fast world we live in today it seems insane having to wait that long, when you can publish your ebook within 24 hours on Amazon.

Creative control is handed over to the publisher

Traditional publishers will license as many rights as possible when they take on a new author.  This leaves many unhappy authors with titles, covers and marketing campaigns they didn't ask for.  Editing may be another issue which will be taken out of your hands when you sign up.
Royalty rates are low

After you've taken out discounts, returns, marketing costs, and overheads your royalty percentage will be calculated, this is based on net total.  Traditional publishing rates go from 7% to 25% with the hindmost amount being fairly generous.  You also get different rates depending upon the format used, such as ebook, paperback, audio etc.  Most authors struggle to understand the half yearly reports sent, especially when the amount doesn't match with what is in your bank account.
Good book marketing is sadly lacking

With more writers than ever online, traditional publishers are looking for established writers that already have their own platform, and ready-made email list.  If your aim is the traditional route, ensure your marketing plan is more than just being included in the bookstore catalogue and a book blogger tour. 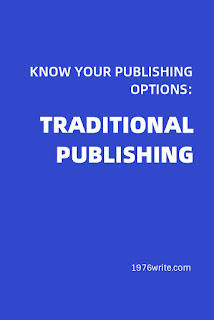 Take note of these potential problem areas when signing a publishing contract:

a. You'll never be asked for more from a legitimate publisher

Traditional publishing will only ever pay authors in royalties, after the advance has been worked off.

b. Never assign your copyright to a publisher

You may get an unethical publisher who will specify that the author hands over their copyrights as a condition of publication.  This is unacceptable and should never happen.  Authors should request the clauses in question be struck from the contract and that they retain the copyright.

c. Paperback book royalties should always be based on cover retail price, and not your net amount

Publishers can take out things like promotion and publicity expenses, rent and office expenses, besides printing and shipping costs, and that's before reaching the net amount.
d. Ebook royalties should be 50% of monies received by the publisher for ebook sales

The reason for this is simple ebooks are cheaper and have virtually no additional costs attached, unlike publishing.

e. Rights should automatically revert back to the author if a book is out of print for more than two years

In your contract there should be a clause for reversion rights stating that the publishing rights will revert to the author if the book is out of print for a certain length of time.
I'd love to hear your thoughts on traditional publishing in the comments below.
Read more:
The Evolution of the Book Publishing

Know Your Income Options After You've Published a Book

What is an ISBN and Why Do I Need it For My Book?

Which is Best Traditional or Self-Publishing
Share this blog post with your friends!
Posted by Helen Bolam at Monday, June 15, 2020

Email ThisBlogThis!Share to TwitterShare to FacebookShare to Pinterest
Labels: publishing