The Benefits of Touch Typing for Writers

A Brief History of the Typewriter

Creating a machine with the ability to put down the spoken word, was a desire of many pioneering inventors.

Things really started to kick-in around about the 14th century when many inventors started building protypes of very early printing machines. Many of these early inventions received patents, some were picked up by the public, but were ultimately discarded.

Plenty of countries would claim they built the first typewriter, but three Americans, Carlos Glidden, Samual W. Soule, and Christopher Latham Sholes, all patented the very first typewriter. Using ideas from earlier inventors, their machine was a strange hybrid, and looked like a cross between a piano and a kitchen table.
The First Commercially Successful Typewriter

Hansen Writing Ball c. 1870, was the creation of Danish inventor Malling Hannen. Originally designed to help the blind to type, because of the uniqueness of the ball design.

Because of it's "Writing Ball" design, it was both slow and cumbersome to use, making handwriting the fastest way to put words on paper.

The Modernisation of the Typewriter

By 1873 Remington Arms company started marketing Sholes practical typewriter. It was fair to say that before Sholes design typewriters were known to be slow, and jam easily. Sholes took the time to study the most common letters used in the English language, and rearranged the keyboard into what we recognise today as the QWERTY keyboard. With this simple arrangement typewriting became faster, and jamming became a thing of the past.


Mark Twain and the Typewriter

Author Mark Twain was the first author to truly embrace the typewriter, he couldn't believe that words could be typed so fast. Twain purchased a Remington typewriter in 1874 for the grand sum of $125. It was from then that popularity for the typewriter really took off. It was Twain who developed the editor standard setting of double-spaced one sided manuscript.

The Typewriter in the 21st Century

Now that you know the brief history of the typewriter, you have a better understanding why typewriter's are still used by many author's and writer's alike.

So What is Touch Typing?

Touch typing also called touch type or touch keyboarding is typing without seeing, or using your eyes to see the keyboard.

That is to say that a touch typist knows the location of all of the keys through muscle memory. The typist places eight fingers on a horizontal row along the middle of the keyboard (or the home row) and is able to reach the other keys and know them by heart.

The two-finger tapper will spend twice as long if not longer on typing, whereas a touch typist will glide through their work without batting an eyelid. 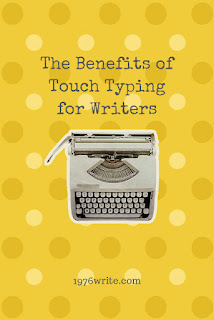 What can a Touch Typist Do?

It's pretty obvious, you type faster! Once you learn how to touch type you can learn how to increase your typing speed.

It all depends on how much time you spend on practising and building your typing speed.

It's a lot easier to type out regular documents such as blog posts, articles, and even books when you don't make as many mistakes as you would as a two-finger tapper.

Keep Your Mind on the Job

You can think more clearly when you touch type, it's also a lot like audio typing. Audio typing is used when a typist listens to a piece of audio and types it out as it's being spoken through headphones. With touch typing you can put your thoughts directly onto paper without having to look at notes you've written out.

You Can Type in Comfort

You don't need to be sitting at your desk while you type, you could be perched on your bed or even in the comfort of your living room. As long as your keyboard is resting firmly in a comfortable position for you to type.

So what have we learnt so far about touch typing?


How Can I Learn Touch Typing Online?

There are numerous websites and courses you can take to start learning how to touch type. Here are some well-known online courses:

Once you start learning and spend time practising your typing speed will start to pick up.  You'll be able to produce more articles, blog posts and books because your able to create more in twice the time you use to.

I learned how to touch type way back in the 90's, on an electronic typewriter, when I did a legal secretarial course at college, it also involved audio typing, and word processing. Time and lots of practice will turn you into a super-speedy typist, able to grapple any writing project that comes your way.

Laptops and PC's make writing production even faster, with spelling and grammar check integrated in most software it makes things so much easier.

60 of the Best Book Designers Online

The Complete to Google Docs for Writers

Ideas and Inspiration for Writes on the Go

24 Places to Get Domain Books