Copywriting: How to Use Psychology to Engage, Influence and Sell

Make use of your audience's selective perception and biases to alter their perspective.

Getting to the truth can be a huge hurdle for most humans, at the best of times.  Causing our brains to suffer from severe mental perception, biases, distortions and omissions that can clash with our reality.  This becomes even worse when we start trying to compare things such as cost, size or probability of a product.  However, for a copywriter these shortcomings can be used in ways to give your copy some extra elevation.

The following points could be seen as a fine line between manipulation or persuasion, and it's up to you whether you feel they should be used in your copy.

The alternate product offered doesn't need to exist in the real world, all it has to do is be of less value than whatever you're selling at the time.  By choosing the grounds of comparison to suit your plan.  For example:

Ideally customers should be querying how many heating programming methods are adequate, and if the number is relevant at all.  However, if you give them two options, one of which is inferior to yours,  they'll go for the best offer every time.

The reality of a double bind is that both alternatives lead to the same place.  For example:

Order online, or call by our store to browse and buy a selection of our sofas.

The reader is presented with two choices, but each ultimately ends in a purchase.  The objective is to offer the customer options that are two levels of behaviour.  How to purchase, and make a purchase, both representing the same thing.  Not buying the product is not included by suggestion.

Bertram Forer, a psychologist, gave a group of students what they thought was a personal profile, but was actually a list of 13 statements that were identical for all of them.  But the students still marked the personal profile 4.26 out of 5 for accuracy, for the most part.

Because the statements were so vague, it was clear that just about anyone could identify with them.  For example:

"You have an intense desire to get people to accept and like you."

"Sometimes you give too much effort on projects that don't work out."

"You can be overly harsh on yourself and very critical."

Some of Forer's most common statements began with 'At times...' Because people don't have personality types, but rather personality states.

Therefore if you're trying to build empathy with your audience, it's much more effective to tap into something they've probably thought or felt at some point in time, instead of trying to squeeze them into a persona.

The endowment effect is the tendency to overvalue what they own.  This means people would prefer to pay extra for something they already own, than get the same article from someone else.  This is because people feel loss when they give up something they already have, and people don't like losing their own stuff.  And they dislike rational thinking even more.

The endowment effect is used regularly in time-limited trials, test drives, free-to-play video games etc.  It makes sense when you think about it, all of the aforementioned things are to hook the audience, and make the product feel like it's already theirs.  Even if money hasn't exchanged hands.

Getting people to buy something can seem like an uphill struggle at the best of times.  When you bring authority into the equation it changes everything.

Most people will already be familiar with the authority you cite, but regardless, all you need to give them is an official-sounding title or qualification.  For example:

Most people won't bother to question the authority you're putting over to them.  This trick has been used by countless copywriters throughout the decades.

An embedded command is a sentence within a sentence, taking the form of an imperative.  For example:

You can visit our store anytime between 10am and 6pm.

The sentence sounds more easy-going and relaxed, and less pushy to the audience.

This is doing the opposite of what we're told, even when it may be beneficial to us.  For example:

You probably won't believe this, but Energylight broadband could be ten times faster than your current broadband user.

Using reactance, the reader is goaded into 'proving you wrong', daring them to not believe, when they went ahead and believed it anyway.

Trying to make a product sound credible with a claim can be really difficult, especially if the product isn't that great.  However, there is a way to get around this by using a partial claim.  For example:

You would think they sound the same, but if you look closer Hair Renew takes all the credit, but you could liken the second sentence to a toddler doing the washing up.

Cold hard data can give your copy a much needed boost, but this only works if the data makes sense.

This is where you can use 'up to', helping you to create a big-sounding claim without saying anything at all.

Root Base reduces persistent weeds by up to 75%

When you use 'up to 75%' it simply means that Root Base weedkiller will only get rid of between 0% and 75%, which isn't really a promise.  But what it is doing is giving a vague indication of an undefined benefit that sounds really good. 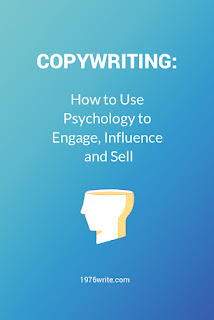 You might be writing copy for a product that doesn't sound too bad, but the price is dubious.

If you can bring a big number into your copy, every other number offered to your audience will sound small in comparison.

For instance, if you're selling mattresses, you talk about the premier model mattress which costs upwards of $800.  But when you reveal your low price mattress from Dormant at 'just' $400, your product starts to sound acceptable.

For all your audience knows, your number could have been pulled out of a hat.

Even when a premium mattress can cost upwards of $800, the Dormant mattress comes in at a moderate $400.

How to Sharpen Your Copywriting Skills

Copywriting, What's it all About?

Copywriting: Understanding the Product You're Writing About

Copywriting: How to Recognise Your Reader

Email ThisBlogThis!Share to TwitterShare to FacebookShare to Pinterest
Labels: copywriting