What You Need to Know About Self-Editing

When you take into consideration the way that the human brain works, and how difficult the English language is to understand, then you start to realise why self-editing is so difficult.

The English language is a hotchpotch of languages mixed together, including Nordic , Anglo-Saxon, Norman French, Latin, and various words that have been stolen from other languages over the centuries.  Most languages manage with only one or two verb tenses, the English language has ten.  With numerous rules such as "I before e except after c."

When you speak a word in English, words usually sound the way they are written.  Many foreign and native English speakers still struggle with the way a word is spelled because it sounds so different to the way they hear it.  For example the word "engineer" will be written like "ingeneer".

There are people today who try to champion spelling reform in English, but with little to no success.

This is Your Brain on Writing

If you've ever written for hours at a time, you know the toll it takes and the feeling of sheer exhaustion like you've just run a marathon.

The simple fact is writing is a very demanding activity on the brain.  As a writer the biggest problem you have is that your eyes only see what your brain thinks should be on the written page or screen instead of what is actually there.  Here is an example of this below:

FINISHED FILES ARE THE RESULT OF YEARS OF SCIENTIFIC STUDY COMBINED WITH THE EXPERIENCE OF YEARS.

How many 'Fs' did you count in the sentence?  If you counted less than six you missed two 'OFs'.  This is because we don't look at every word that is written.  Another example of this is the predictive text that you find on your smartphone or tablet.  When you're typing out a message it's already predicting what comes next.  When your brain is focused on the meaning you jump over conjunctions, and prepositions to the content words.

Below is another example, this time read it quickly.

THE PAOMNNEHAL PWEOR OF THE HMUAN MNID.  Aoccdrnig to a rscheearch mttaer in waht oredr the ltteers in a wrod are, the olny iprmoatnt tihng is taht the frist and lsat ltteer be in the rghit pclae.  The rset can be a taotl mses and you can sitll raed it wouthit porbelm.  Tihs is bcuseae the huamn mnid deos not raed ervey lteter by istlef, but the wrod as a wlohe.

The above word illusion is another example of how your brain starts to catch up and you end up reading at normal speed by the end.

As a typist my fingers automatically start typing the words in the correct order, it shows that even your fingers see what they think should be there. 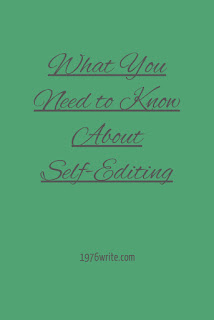 Over the years you've probably read hundreds if not thousands of publications from magazines to books, but how many mistakes have you found? I think typos are rare if not practically extinct when it comes to mainstream publishers.  So how do they do it? Is editing a talent that comes with good genes?  Or is there an AI program you don't know about?

The answer is no it's neither.

The simple fact is they hire professional copyeditors and proofreaders to do the job for them.  These people know how to find those pesky mistakes and eliminate them.  The secret is that professional editors go through text meticulously, each time with a different goal in mind.  They use editing tools such as Grammarly, WordRake, and PerfectIt.  Pacing their workload and taking breaks at appropriate times.

So what have I learned about self-editing?

1. You need the right mindset, and realise that copyediting is part of the craft of writing.
2. Overall editing text professionally will give you an edge as a writer, and the reader will have a better overall experience.
3. Errors can be costly and embarrassing.
4. The English language is full of many irregularities both spelling and grammatical, and also because your brain sees what it thinks should be on the page.
5. Anyone can self-edit, that's the secret, if you have the time to learn you can learn the techniques and tools required to be a professional editor.
Read more:
The Essential Proofreading and Editing Guide

What You Need to Know About Editing a Book

Email ThisBlogThis!Share to TwitterShare to FacebookShare to Pinterest
Labels: proofreading and editing