Did you know that when you write you use all four lobes of the brain?

Writing may not be everyone's forte, but these facts may help you change the way you look at writing forever:

1. Here's a weird fact, an ambigram is a word that can be viewed or deciphered from different direction's, perspective's and orientation's.

2. A crutch word is used to give the speaker more time to think or reiterate a statement.  They usually don't add any real meaning to a statement.  A perfect example of this is "actually".
3. Our etymological capabilities are so good that new words are created every two hours.

4. 'I' is the most frequently used word.

5. Another strange fact is the 'ghost word'.  These are words that are published in the dictionary but rarely used.

6. The longest word in the English language is 'pneumonoultramicroscopicsilicovolcanoconiosis'.  Medically known as silicosis, referring to a lung disease.

7. A sentence containing every letter of the alphabet is a pangram.  Eg. The quick brown fox jumps over the lazy dog.

8. 'I am' is the simplest sentence in the English language.

9. A regular ball point pen can give you a straight five mile line.  The humble pencil can go seven times further at thirty five miles.

10. The fastest typist ever recorded was Barbara Blackburn who typed 150 wpm for 50 minutes. 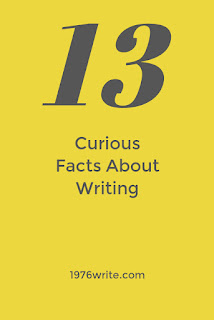 12. 'Writer's Block' or 'colygraphia', the inability to bring about fresh ideas.

13. Mogigraphia a disorder caused by cramps and muscle spasms in the hands and forearm, usually when writing (performing fine motor tasks).
Read more:
The 10 Top Creativelive Courses for Writers

How to Recognize Your Writing Style

What Sort of Writer Are You?


This post contains affiliate links.  This means if you purchase through my links, you're supporting 1976write - and we thank you for that!