Are you perplexed by the sheer number of writing and publishing terms out there?

Here is a comprehensive list of writing and publishing terms to guide you through the writing vernacular.

When the person or thing is typically performing the action.

A story or written work modified for film, T.V., stage or radio.

A payment offered to an author against royalties when a book publisher is interested in a manuscript.

This usually means that either a publisher or author/writer owns the rights to publish the work in any form.

A hidden message or inserted in a storyline.

A literary device that uses a series of words beginning with the same consonant sound.

The opposite of the hero or protagonist in a story, usually a villain like Thanos in the Marvel comics.

A compilation of stories that contain a common parallel.

The action used to give credit to a particular author, quote, illustration or element to its source.

A life story written in the first person.

Also called End Matter, the extra parts of a book that starts after the main text.

A backlist of older book titles available from a publisher but still in print.

A background or set of events created for a plot, usually set before or leading up to that plot.

A structural element of a story used to mark an important turning point.

A section of a book containing sources, quotations and books referenced in the publication.

A person's life story written by someone else.

A short description of a book usually written for promotional purposes.

Commonly used in newspapers and magazine articles giving the name of the writer of the article.

The transformation or inner journey of a character occurring throughout the story.

A genre of fiction specifically written for a female audience.

An overused idea or expression used in storytelling.

A plot device used to end a chapter or book in high suspense, to encourage readers to read on or buy the next book in a series.

How writers tell their readers where certain information or sources have come from.

Used at the highest point of tension or drama in a story plot, usually as the finale or end.

Checking the consistency and accuracy of text before it's published.

Text written for the purpose of advertising and other forms of marketing.

The legal right given to the owner of an original work.

The final outcome or resolution of a plot.

Also known as structural editing, a developmental editor will focus on the main focus of the book and its direction.

Conversation between two characters in a story.

Opposite of utopia, describes a highly undesirable society or world.

The preliminary version of a manuscript. 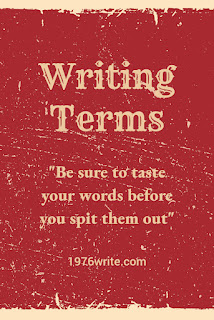 A process that requires the revising of a manuscript, or content, to make the ideas presented as clear as possible to the reader.

An editor is the critical reader whose job it is to polish or refine a manuscript before it's sent in for publishing.

An article written by or under the direction of an editor of a newspaper or magazine.

Is the prohibition of a published work until a specific date, used within a press release.

Is the information that appears after the main body of text of a book, which can include your acknowledgements, Author's note etc.

Can be short additions, clarifications, or copyright information placed outside of the text, providing the reader with an overall better experience.

A literary device that ties up all of the loose ends of a story.

The use of a small portion of a work, usually less than 10 percent, for educational or illustrative purposes.  Including attribution and not violating copyright.

The point of view seen through the eyes of the main character in a story, using pronouns such as "I" and "me."

Usually the right of the publisher to publish first, but does not stop anyone else from publishing a work at a later date.

Usually a note placed at the end of a page, and often refers to parts of the text.

The layout of a manuscript or content, which includes spacing, indentations, font and margins.

Usually at the beginning of a book, and include pages such as title, table of contents etc.

A typeset or advance copy of a book

The categories that distinguish works of literature.

A person that takes on the physical labour of writing a book for someone else.

A novel that tells the story primarily through images instead of text.

Refers to a digital document that has been printed out on paper.

A book that is bound with a rigid binding usually using cardboard with a paper dust cover.

Often called the bastard title refers to the page that contains nothing but the title.

The idea of the book condensed into one sentence.

Is a literary genre that takes place in the past or often captures a particular period of time in the past.

Usually the first sentence that's been written to grab the reader's attention.

The language used to stimulate the reader's senses.

Usually used for branding purposes, an imprint is the name used to publish a book which is different from the real company name.

Is the international standard book number used by all publishers and consists of 13 digits.

Books written for children up to the age of 12.

A fee given to a writer for an article that was never published.

The opening paragraph of a book, article, essay, or other written work.

Sometimes called stylistic editor, a line editor ensures that a manuscript or article is as effective as it can be.

A person who works with authors and acts as an intermediary between authors and their publishing houses.

A one-sentence description of summary of a screenplay. 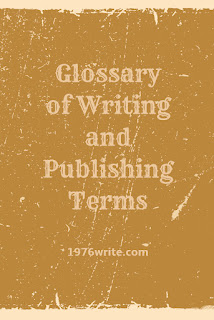 The final copy of a work before publishing.

Edited notes added to a manuscript.

Usually a small trim book designed for the general public.

A first-person written account of events or memories from the author's life.

Refers to the atmosphere or ambience in a work of writing.

An order of events that form a story.

Usually the person recounts a story told in the third person.

A book of fiction with a complex plot.

A novel is a book that is adapted from a movie or other format.

The arrangement made between an editor whereby a writer is paid when an article is accepted for publication.

The arrangement made when the writer is paid when the article has been published.

When a writer submits a script to a publishing house, magazine or screenplay before receiving an assignment or signed contract.

Every event or point of a book that makes up the overall structure of a book written as a first draft.  In fiction it's used to iron out any weak spots beforehand.

The speed at which a story is moving for the reader.

A book characterised by a softcover made with thick paper or paperboard.

Usually an imitation of a particular writer, written in a humorous fashion.

A sentence containing a passive voice will produce a sentence where the subject will receive an action.

A pseudonym or nom de plume a writer will use that isn't their own.

A typographic measurement used equal to 1/6 of an inch.

Usually no longer than 500 words, a brief description used to convince a publisher to commission a piece.

The act of presenting someone else's work as your own.

A sequence of events that make up a story.

A measure used in typesetting that is equal to 1/72.

Refers to the perspective from which a story is told.

A method of remotely printing books.

The basic concept of a story.

Number of books printed at the same time.

When a manuscript is checked for technical errors relating to grammar, spelling, punctuation, capitalisation.

An introduction to a literary work.

The act of creating a written pitch for publishing.

The character in a story that is mostly affected by the antagonist of a story.

A fake name used by a writer.

A work not protected by copyright.

Usually a one-page written proposal sent to an agent, editor or publishing house.

The quality of a person's writing is measured by sentence length, sentence structure and the average syllables per word.  All of these factors combined together are the gage whereby a writer's readability level is assessed.

The letter sent by a publisher to the author to reject a manuscript.

Reprints are works that have already been published but are published again elsewhere.

The amount a publisher pays an author in exchange for rights to publish their book.

When two or more independent clauses (or complete sentences) are connected incorrectly.

A literary device used to poke fun at something.

Usually a written work for T.V. or film that expresses the movement, actions and dialogue of characters.

The process of writing stories in the screenplay medium.

When an author publishes a piece of work independently.

A fictional serial released in instalments.

Usually a fictional plot written under 5,000 words and published alongside other material, instead of stand-alone.

Usually a book that is written in two languages, with one language written on even pages, and another language version written on odd pages.

The perspective used to write a story.

A publishing company that often specialises in a particular genre that isn't a major publishing house.

A device used to reveal the inner thoughts of a character in a story through the antagonist to prepare the audience for the hero's attack.

The visible end of a book when placed on a bookshelf.

Is defined by the way a writer writes, which can include literary devices, sentence structure and word choice.

Mainly used by editors as a guide for treatment of specific items in a document.

Rules that authors and writers follow when submitting a manuscript to a publisher.

A narrative thread woven through a book to support the elements of the main plot.

A brief summary that gives readers an overview of the main points.

A sample of the author's published work.

The underlying theme or idea that a writer explores when writing a story.

The main argument put forward by an author in non-fiction.

Refers to the mood implied by an author's word choice and the way the text can make a reader feel.

A paperback with a softcover that has a larger trim size than that of a mass market paperback.

The detailed description of a film on which a screenplay is based.

Usually the height and width of book's pages.

Where authors pay to have their books published.

Refers to the mixture of tone, point of view, word choice, syntax, punctuation and rhythm that make up sentences and paragraphs.

An area of a page without text or images.

Number of words used in a manuscript.